Declaration of the Ministry of Foreign Affairs of Cuba 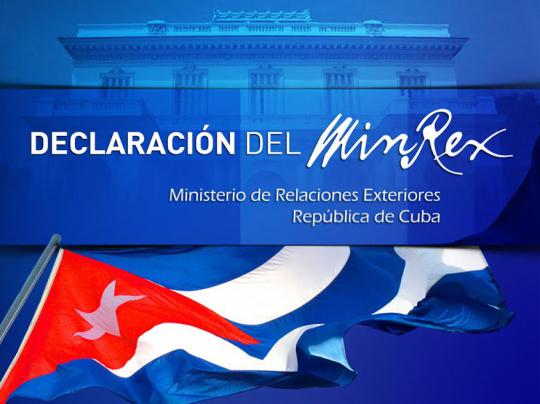 We have witnessed, once again, another infamous and immoral decision of the discredited OAS, against the Bolivarian Revolution, which reissues the embarrassing pages written against the Cuban Revolution in the sixties of last century.

The convocation of a Meeting of Consultations of Ministers of Foreign Affairs to continue to harass the Venezuelan government constitutes another action coherent with the traditional role of that organization as an instrument of imperialist domination in the hemisphere; In order to break the sovereignty, independence and dignity of Our America.

The OAS has always remained with its backs to the peoples of America, with a history of almost 70 years of subordination to oligarchic and imperialist interests. It has been absent when our region has been the victim of political, economic and military intervention and aggression, or serious violations of democracy and human rights.

It is time to acknowledge that the OAS is incompatible with the most pressing needs of the peoples of Latin America and the Caribbean. He is unable to re + present his values ​​and interests. It imposed a false democratic creed, responsible for the deaths of hundreds of thousands of Latin Americans and Caribbeans and the poverty and exclusion of millions. The OAS assaults and imposes, and does not reconcile or dialogue; Disregards the equality and self-determination of States. It conspires and subverts genuine and legitimately constituted governments with proven popular support. It deserves the most profound repudiation.

Venezuela has adopted the dignified decision to withdraw from the OAS, which we firmly support, having bravely faced the harassment, interference and ignominy of the one that has been the object of this institution and its feverish Secretary General. For the sake of the defense of the collective interests of the region, both Chávez in his time, as now President Maduro, faced their betrayals with dignity and courage. But the OAS never set out to accept a popular government, much less help Venezuela, as some preach. On the contrary, it was increasingly aligned with the aims of overthrowing the Bolivarian Revolution.

The aggressions against Venezuela and the contemptible conduct of the OAS against it confirm that wherever there is a government that does not suit the interests of imperial power circles and their allies, it will be attacked. The new methods of attrition, more subtle and masked, without giving up violence, to break the peace and internal order, do not hide the old strategy of demonstrating the unfeasibility of progressives, the left and their struggles for economic development and Social development of our region.

Cuba ratifies its firm commitment to accompany Venezuela and the dignified, courageous and constructive position of President Nicolas Maduro at the head of the Bolivarian Revolution. We express our support and solidarity to the Venezuelan people and government in this new chapter of resistance and dignity, convinced of how much we have left to struggle to achieve unity and maintain the foundations of the Latin American and Caribbean Proclamation as Zone of Peace , Signed in 2014.

5 years ago Translations67
A Revolution is Not a SpectacleWhy is May Day observed?