Home Cuba at the Baseball Pre-Olympics

Cuba at the Baseball Pre-Olympics

Cuba at the Baseball Pre-Olympics: Frustration, Hysteria and Hatred, Three Strikes that Strike Out Attacks on Cuba

Today begins the pre-Olympic baseball tournament of the Americas, in which the Cuban team, starting at 1:00 p.m., will face its Venezuelan counterpart in West Palm Beach, Florida. However, a group that is not even remotely a majority, intends to continue playing and, of course, losing, the war. To do so, they resort to violence and, logically, to lies. The target of their attacks are the Cuban baseball players. 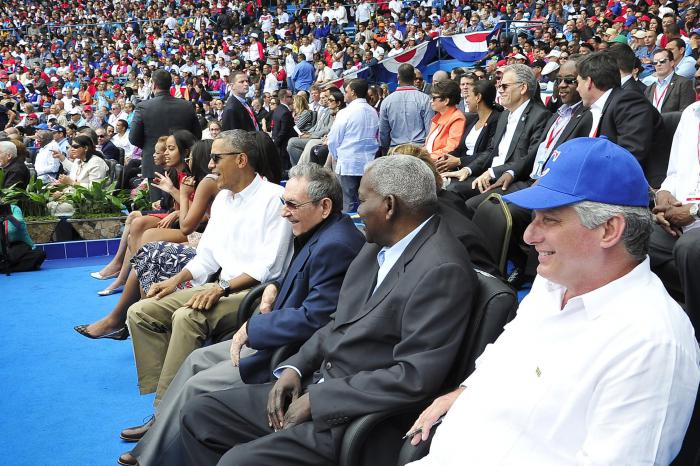 Today begins the pre-Olympic baseball tournament of the Americas, in which the Cuban team, starting at 1:00 p.m., will face its Venezuelan counterpart in West Palm Beach, Florida. However, a group that is not even remotely a majority, intends to continue playing and, of course, losing, the war. To do so, they resort to violence and, logically, to lies. The target of their attacks are the Cuban baseball players.

Protected, organized and directed by Senators Rick Scott and Marco Rubio, Congresswoman Maria Elvira Salazar, and summoned by the cheap spokesman of that leadership, Alexander Otaola, the members of that segment have organized to meet at the baseball park. There, according to Otaola himself, they will protest against the presence of representatives of the “totalitarian” government of the island. In order to guarantee their presence, the legislator even allocated resources for the purchase of tickets.

It was reported that the security of the stadium, whose responsibility falls on Scott himself, would allow the pronouncement by means of offensive posters and the throwing of objects on the field against the players. Even the attack phrases, which out of respect will not be published in the pages of this newspaper, contain obscene words. As if that were not enough, they also announced that they would attack the bus on which the athletes were being transported.

The rules of the Olympic Charter, and this is a tournament under the Olympic umbrella, since it is about the qualifying for the next Games in Tokyo, obliges the hosts to guarantee the normal development of the competition. This includes the safety of each of the participants. In other words, the U.S. authorities, both sporting and governmental, are responsible for what happens to any player.

It is not new to proceed in U.S. territory for our sports embassies. Today it is the frustrated Otaola and his bosses, losers as always, in the face of the virility of the Cuban people and their overwhelming support for the continuity of the Revolution and its successes. These are despite the blockade, more than 240 measures of an alienated president, which the current president has not even touched, and the pandemic. “Poor little ones”, how they have yet to suffer.

Next June 10 will be the 55th anniversary of the Declaration of Cerro Pelado, the name of the ship that carried the athletes to the Central American and Caribbean Games in San Juan, in colonized Puerto Rico. That text expressed the willingness of the delegation to participate, even if they had to swim there. Before, in Jamaica-1962, in a similar event, also in a baseball stadium, Sabina Park, provocateurs like those of today threw chairs and sticks against the members of the delegation, who defended themselves, causing their aggressors to flee. In 1963, in the Pan American Games in Sao Paulo, the plane carrying the athletes was not allowed to touch the airport runway, and the then-president of Inder, José Llanusa Gobels, told the pilot who landed that “we came to compete, it is our right”.

In Indianapolis-1987, the Pan American event found the same hostile environment in several of the scenarios, as in 1999, in Winnipeg, where they even authorized a newspaper, plus a radio station, to whip and incite the desertion of our delegation.

In contrast, never has a U.S. athlete, a member of their delegations or a journalist been assaulted in Cuba, neither physically nor morally. None has been insulted. In March 1999, the Baltimore Orioles baseball team was here, and its players, such as Charles Johnson, known by the fans for his presence in the 1991 Pan American Games, when he hit a decisive home run, was applauded. We gave an earlier ovation to Jim Abbott, that excellent pitcher who was missing a hand, which was not an impediment to his exceptionally. The same applied to his teammates Robin Ventura, Joe Carter or Greg Olson.

It was precisely, in the multisport meeting of America, in 1991, at the dawn of the special period, that Cuba offered US TV to broadcast the Games free of charge.

In Havana, in March 2016, the president of the United States himself attended, in a full stadium, the match between Tampa Bay and Cuba. He was received with utmost respect for his country’s anthem, its flag and his high investiture. There is not a single outrage or slander from the sports press to U.S. athletes. US Baseball players have been received in the bilateral tops and, later, these same people have admired their results in the major leagues, as in the recent cases of Maikel Conforto or Carlos Rodon, the latter author of a zero hit zero runs in this major league season, which was praised by the national sports chronicle.

It has never occurred to anyone that, because of political or ideological differences or because of a criminal blockade, ordered to starve, the work of the governments of the United States, that a baseball player should be booed or mistreated. The same for its President, who sat, with his family, behind home plate at the Latinoamericano sports stadium, a place where the daughter of the legendary Jackie Robinson, received, on behalf of her father, the prolonged applause of tribute to the first Black player in MLB.

Those who today seek to attack and repudiate the Cuba team in Florida have recognized, as they themselves published in social networks, that the issue is political, and it does not matter that they are athletes, artists, journalists or doctors, that they are not government officials. They, like their bosses, do not act against governmental structures, they act against the people, because that, people, are the ball players, whom Otaola, disrespectfully, called hairy rats.

By the way, the players who are looking for their Olympic ticket are clear that their mission there is to play baseball and give a good show to the crowd and to many of their followers who will go to support them. They seek they want the victory of their country, like those who this weekend spoke out against the blockade in several U.S. cities.

For the haters, even if they do not understand a thing, we leave them two messages in the voices of Martin Luther King, Jr., pastor of the Baptist Church, and José Martí. The Cuban-born Martí said: “Nothing a man does debases him more than to allow himself to stoop so low as to hate someone”. And the most universal of Cubans portrayed them: “The barbarians who entrust everything to force and violence, build nothing, because their seeds are of hatred”.

1 year ago Granmabaseball, blockade0
The Party of the Cuban Nation?Silencing the Study of Race and Equity