Home Breastfeeding: a support for life

Breastfeeding: a support for life

Breastfeeding: a support for life 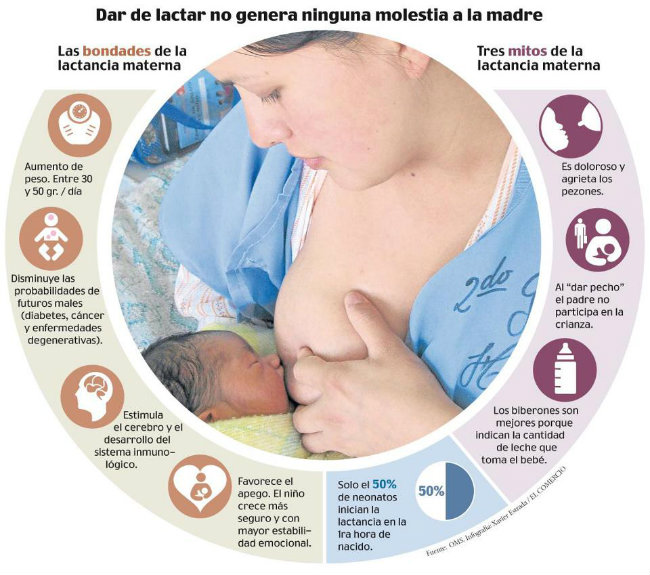 Benefits of breastfeeding. Taken from the internet

Breastfeeding is the first act of love given by a mother; moreover, it goes beyond the emotional connection established between her and her child.

It is scientifically proven that breast milk is the only food that children require for the first six months of life. “Any other type of drink, including water, would increase the risk of diarrhea or other illnesses. Exclusive breastfeeding is therefore the baby’s first immunization; there are no alternative formulas for its protection at the beginning of life,” said Dr. Roberto Álvarez Fumero, head of the Maternal and Infant Department of the Ministry of Public Health (MINSAP).

It is necessary to reiterate to Cuban women and their families the advantages of this universal and scientifically proven nutritional practice. Unfortunately, this ideal means of protection is not being used in an exceptional way up to six months of age by 70% of women, said Dr. Fumero.

In this sense, World Breastfeeding Week (August 1-7) is dedicated to promoting this practice as the optimal mode of nutrition in infancy. Its privileged use is based on the fact that human milk is composed of 88% water, a characteristic that facilitates the filtering function developed by the kidneys, so that the baby does not need to be rehydrated with any other liquid other than what the mother can offer.

A method of salvation

“Exclusive breastfeeding also means food security for children, because it can reduce hunger, malnutrition and obesity,” says the World Health Organization (WHO) in its campaign to promote this experience. In Cuba, actions are prioritized so that the whole society understands the goodness and countless benefits of this custom, which is an essential factor to achieve the Sustainable Development Goals in terms of health, explained the MINSAP specialist.

Earlier this year, the scientific journal The Lancet published a series of research studies, which show that increasing breastfeeding could save more than 820,000 children a year, nine out of 10 of them in the first months of life.

Fumero warned that infectious diseases are re-emerging in the world and there are others that -although our country has been able to control the hygienic-sanitary conditions that predispose them- continue to exist.

Its benefits for both parties are undeniable: it facilitates the development of the child’s intellect and protects it from possible chronic non-transmissible diseases; in women, it reduces the risk of hypertension, breast and ovarian cancer, postpartum depression, osteoporosis, and reduces weight gained during pregnancy.

The mother will help her health after childbirth with three balanced meals a day and two snacks; a nutritious formula sufficient to provide energy to the nursing mother.

According to studies, the amount of milk has nothing to do with the ingestion of beer or any other type of beverage perpetuated for generations as a stimulant to better flow the first food we receive in this world.

Similarly, Alvarez Fumero argued that investing in breastfeeding has a significant impact on the health of women and children and on the economies of families.

A guarantee from the start

Despite the persistence and vigilance on the part of MINSAP, Dr. Fumero stressed that Cuban mothers have to overcome a group of myths that unfortunately is passed on to several generations and more and more women are looking for a pretext not to breastfeed.

According to the Multiple Indicator Cluster Survey (MICS) conducted by the Ministry of Public Health between February and September 2014, only 33% of Cuban children received exclusive breastfeeding up to six months.

Regarding the issue, the scientist stressed that we cannot tolerate any excuse to stop breastfeeding when scientifically there is none that prevents it.

“This figure has a lot to do with cultural patterns in families that can be changed with the support of everyone, mainly family doctors, community organizations and the media,” Anna Lucia D’Emilio, representative of the United Nations Children’s Fund, once told the press.

For this reason, it is still a challenge to continue increasing actions to promote and encourage breastfeeding in Cuba, and this need is reflected in the MICS surveys, which indicate that 96.2 % of children born in the last two years have breastfed at some time. This percentage was 98% in 2011, according to these surveys.

According to the 2014 results, 48 % of infants breastfed within the first hour of birth, a figure that is also decreasing compared to the 77 % recorded in 2011.

The specialist concluded that guaranteeing optimal breastfeeding practices requires the support of the family and especially of the couple, who should share the mother’s sleepless nights and collaborate in every way. In addition, he added, it has been associated with long-term social behavior, which is more often adequate in those children who received exclusive breastfeeding.

By supporting and promoting breastfeeding, the nation complies with article 24 of the Convention on the Rights of the Child, which states that infants should enjoy the highest level of health.

In this sense, the specialist underlined the importance of having Human Milk Banks (BLH) in the country. These are currently located in eight provinces: Pinar del Rio, Havana, Matanzas, Las Tunas, Granma, Holguin, Santiago de Cuba and Guantanamo.

It is essential to emphasize that the BLHs are attended by mothers with their partners as it is part of the responsible motherhood that is intended to be transmitted in the country. At the end of 2015 in Cuba, 3 thousand 19 mothers became donors, and thanks to this, 738 liters of milk were collected, which benefited 1 thousand 285 newborns.

This August 4, bank number nine will be inaugurated at the Camilo Cienfuegos hospital in Sancti Spíritus, with the aim of helping in the survival of newborns, especially those born with congenital malformations and those who present malnutrition in the first stage of life.

About the author
Raiza Arango Medina
Graduated in Journalism at the Faculty of Communication of the University of Havana in 2014. Since then she has been dedicated to writing and research on social issues, aging and population dynamics. She is also one of the main editors of the Health page, specializing in topics related to health, science and technology. She has attended several postgraduate courses at the Center for Psychological and Sociological Research and at the International Institute of Journalism, related to the study of Cuban society.

1 year ago Trabajadoresbreastfeeding0
The Challenge of Breastfeeding in CubaWhy No Socialism (for now) in the US?