Migrants, seeking to reach US soil to seek asylum, are now in Guatemala. 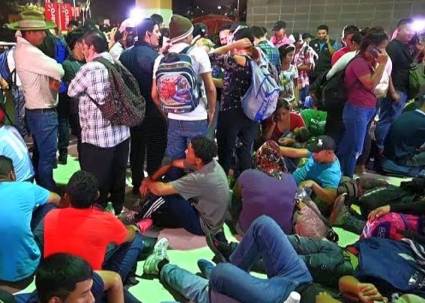 MEXICO CITY, January 17.- Mexican President Andres Manuel Lopez Obrador reported Friday the availability of 4,000 jobs in the southern border of the country for the migrants who are part of the caravan that left Wednesday from Honduras toward the United States.

About 2500 to 3000 migrants come in the caravan from Honduras, and El Salvador, López Obrador said during his daily news conference, in which he announced the existence of 4000 jobs available  on the southern border, he said.

The migrants, who are trying to reach U.S. soil to seek asylum, are now in Guatemala. The new president of that country, Alejandro Giammattei, said that the Mexican Executive, through its foreign minister Marcelo Ebrard, assured him that it [Mexico] would prevent the entry of the new caravan.

The Mexican government has warned us that it will not let them pass, that it will use everything in its power to stop them,” Giammattei told local media, according to RT.

Nearly 1,000 people gathered in the Great Metropolitan Central, in San Pedro Sula, in northern Honduras, to start the new caravan that aims to reach the U.S. in its flight from violence, poverty and lack of employment in that Central American country.

In September 2019, President Donald Trump reached an agreement with his Honduran counterpart, Juan Orlando Hernandez, to supposedly improve asylum capacity by containing the flow of migrants from other Central American countries.

In addition, the U.S. signed a similar agreement with Jimmy Morales, former president of Guatemala, for them to become a safe third country and for Salvadoran and Honduran migrants to seek asylum in that Central American nation, not in the U.S.

On the other hand, he pressured the López Obrador government to stop migration from Central America, in exchange for not imposing tariffs on Mexican products that are exported to the United States.