Home A truck full of explosives in Washington, D.C.

A truck full of explosives in Washington, D.C.

A 70-year-old man is charged with possession of eleven Molotov cocktails, as well as an assault rifle and three handguns 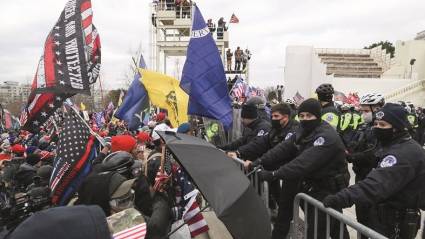 The District of Columbia Attorney’s Office has filed charges Friday against an Alabama man who allegedly parked a van with 11 Molotov cocktails and other weapons near the Capitol on Wednesday, the same day of the congressional riots.

According to the statement from the Attorney General’s Office, on January 6, Capitol Police officers were warned of the possible presence of explosive devices in the area surrounding the legislative seat. During a protective sweep of the area, agents observed the handle of what appeared to be a firearm in the passenger seat of a pickup truck, which, according to their database, belonged to Lonnie Leroy Coffman, a 70-year-old man from Falkville, Alabama.

When they proceeded to search the vehicle, the police found a pistol, an assault rifle, as well as rifle clips loaded with ammunition and components for the manufacture of eleven Molotov cocktails (glass jars filled with flammable substances, rags and lighters).

Later, Coffman was stopped near his truck when he tried to return to his vehicle. When he was searched, he was found to be carrying two other guns.

1 year ago Juventud Rebeldeterrorism, Trump0
Why No Social Outbursts in Cuba?Sixty-two years of building "heresy"