Home A necessary and united mobilization

A necessary and united mobilization

A necessary and united mobilization

This is the time to achieve unity to deal with Trump 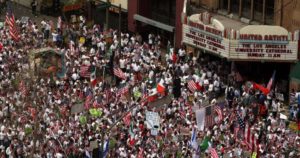 There were hundreds of thousands of people who marched on March 25, 2006 in Los Angeles. / Archive PHOTO: ARCHIVO / JEFF GRACE / IMPREMEDIA

In 2006 the immigrant community throughout the nation went out massively against the H.R. 4437, the law which was to criminalize all undocumented. Now we live another moment of urgency that requires a similar demonstration of repudiation. The date is 1st. May 1st to denounce and resist against a cruel immigration policy.

Today the situation is much worse than that of 11 years ago.

Before the mobilization was preventive. The purpose was to warn of a threat that appeared to justify the persecution of the undocumented.

Now that threat has become a reality. H.R. 4437 failed, but its designs are being implemented by President Donald Trump more than a decade later.

The president’s campaign rhetoric that relied on anti-immigrant resentment came true with his executive orders. The criteria were extended so that a person could be deported and a freedom of action was given to the agents of the Immigration and Customs Enforcement Agency.

The result is a policy that has terrified the Latino community due to its arbitrariness, its methods and its impact on the family.

In cities and states of our country, it is seen that the fear of ICE ‘s aggressive actions, for example, is reducing the attendance of Latinos at church,. And the drop in the number of reported crimes, such as domestic violence and sexual abuse – for fear of deportation – worries Los Angeles police.

There are arrests they make in the courts, in the vicinity of schools and even the Dreamers. These are outrageous as the accounts of separated families and detainees who are not on the list.

This May 1st is the time to protest against this persecution in a coordinated and effective manner, unlike the disorderly “Day without Immigrants” on 16 February.

International Labor Day represented the migrant worker for a long time in the United States. Now the march has ample support from the labor sector which feels the impact of the Trump administration.

We join this protest. To march without fear, not to buy and to support the immigrants that day even if it is with a sign of support in the window of an automobile.

This is the time to resist with all the legal weapons at our disposal. Let’s use them!