Home A “guajira” with good aim

A “guajira” with good aim

A “guajira” with good aim 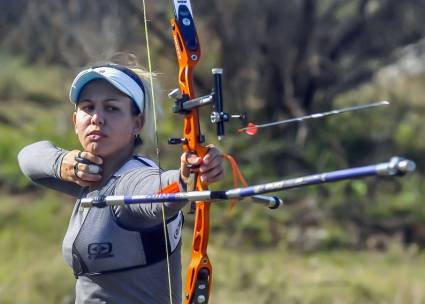 The cry of “guajira” is heard almost constantly in the training area of the women’s national archery team. Everyone knows that when Professor Vladimir Quintas comes to the appellation, he is calling Elizabeth Rodriguez Camilo.

The 25-year-old from Santiago is the captain of the Cuban women’s archery team and does not even wrinkle her face at the adjective that replaces her name, since she knows how fond the word is when it is pronounced by the person who was her first coach when she joined the national team, approximately eight years ago.

Rodríguez Camilo is currently the best goalkeeper in Cuba. This is guaranteed by her status as national champion, a title she has won four times in a row, and also by her results in international tournaments, including two fifth places in the Pan-American Games of Lima 2019, one in the team modality and in the mixed recurve goal.

“For me, as an athlete, it is important to have won the elite tournament of my sport so many times. That’s why I prepare myself all year long, always making my best effort to win. I don’t see the domestic competition as the highest step I have to reach, I think that at the level I’m at I have to aspire to more”, commented the young woman exclusively for JR.

For Elizabeth, that step up is certainly no different than the Olympic Games. The fact that she has never been under the five hoops is a motivation for the youngster who almost achieved her dream four years ago, and now she has the chance to make it happen again.

“For the Rio 2016 Olympics I was just a few inches away from the qualifying event, because my opponent shot very well, in the end, we went to a playoff arrow and he beat me by proximity, so I have a little thorn in my side that I hope to get out of the qualifying fight that will be in the Mexican city of Monterrey, from the 22nd to the 30th of this month.

I hope and can get the Olympic place, although I assure you I would be very happy if another one of us gets it, because that will be great for the Cuban archery. However, contrary to what happens in other sports where the country wins the ticket to the competition and not the athlete, we internally decided that whoever gets the ticket is the one who will be in Tokyo. I think that’s the fairest thing and it’s an additional stimulus that we have,” argued Rodríguez Camilo.

The untamed young woman is one of the few athletes who has the opportunity to share her training and competitions with figures with vast experience in the discipline such as the woman from Matanzas, Maidenia Sarduy, whom she accompanied in what was her first foray outside the country when she was only 18 years old.

I’m lucky enough to be on the same team as Maidenia,” he said. “Her advice, like Larissa Pagan’s, was fundamental. She helped me face my first international experience at a Central American qualifying event for Veracruz 2014, held in Medellin, Colombia, where the World Archery Championship was also held.

“There I was 33rd in individual archery and fifth place in the team. That was a competition that even scared me a little bit because of the high level I had, so it was essential to have the support of those figures,” emphasized Elizabeth.

Perhaps the most difficult thing for the Cuban Artemis is to be away from home, especially from her mother Kenya, who says it is her life and like the rest of the family supports her in all her decisions, including that of leaving the sport if her personal goals are not fulfilled.

“My particular aspiration is to finish this Olympic cycle and complete another one. Although this discipline is very long-lived, where you can be in it for years, I do want to make my family and living so far away does not make things easier for me. If I could put down roots in Havana, something that would allow me to form my family and have my mother with me, then I would gladly continue with bow and arrows under my arm, otherwise, I would say goodbye to it,” she emphasized.

2 years ago Translationssports, Women0
Bolivia - Report "Finds Out" What We All KnewTrump's Trick for Afghanistan Withdrawal