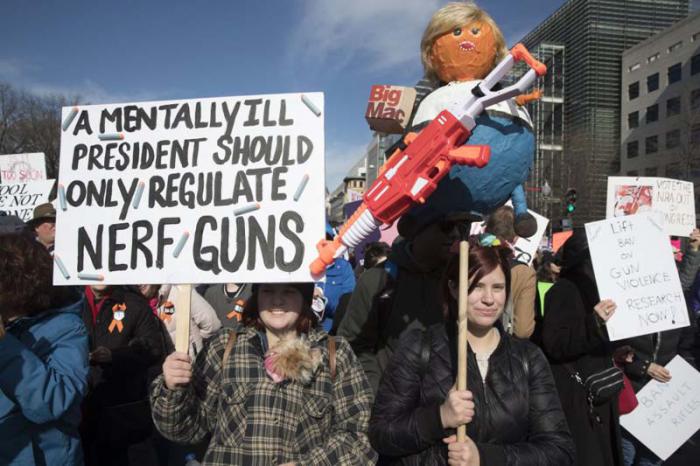 The March for Our Lives in America brought together some 800,000 people. Photo: Cadena Ser

There is “no such thing as an American citizen’. I always remember that quote from a friend from St. Louis, Missouri, an exchange student who spent a semester at the University of Havana. He explained it through the idea that Americans are very different from each other: 50 states on a single flag of stars and stripes. The thirteen (former) British colonies that united and expanded to form a single state.

That’s one of the reasons why many are surprised to see together in one voice, in Washington alone, more than half a million northerners on the march for a cause. It happened on Saturday, March 24th. One month and ten days after Marjory Stoneman Douglas High School in Parkland, Florida, where 17 people were killed by AR-15 rifle fire.

HOW WAS THE MARCH ORGANIZED FOR OUR LIVES ORGANIZED?
The great march, already listed as one of the most vibrant in Washington’s contemporary history, was organized in that capital. The goal is clear: to denounce the armed violence that is spreading like a virus in the nation of Lincoln.

Because of its sensitive nature, it overwhelmed the city of the White House and the Capitol and reached the entire country in the form of mass demonstrations united in the cry of “enough”.

It was the young survivors of the February 14 events in Parkland who drove it forward, but around them – Emma Gonzalez, David and Lauren Hogg, Cameron Kasky, Jaclyn Corin, Alex Wind, Sarah Chadwick, Dylan Baierlein and Matt Ditch, among others – many stood for the same struggle, both physically and in social networks and other media.

Although the heart of this cry was born in Florida; in the throat of that Washington of McDonald, Coca-Cola and Starbucks locations, tens of thousands of people took to the streets to demand restrictions on access to guns in a country that sadly stands out for an arms race that finds no goal: it is the nation with the most guns and rifles per capita on the globe.

A Yahoo News text states that the March For Our Lives and its international aftershocks “sent a powerful message against the legislative deadlock that has long prevented stricter gun laws from being adopted in the United States, where mass shootings in schools and universities have become frighteningly common.

So the march served as a reminder of similar massacres, such as Columbine and Sandy Hook.

THE ALLIANCE BETWEEN ARMS AND THE ESTABLISHMENT
This type of massacre is not new at all. Part of what theorists have called the alienation of individuals in capitalist societies where the culture of shooting reigns as a reflection of excessive production and “consumption” of weapons.

Much was said when, less than a month after the Parkland victims were buried, with their bodies still warm, the National Rifle Association (NRA) was holding an arms fair in Florida.

But nothing’s going on. Shocking the U.S. government seems like a Mission Impossible type of adventure, considering that arms agencies finance presidential campaigns.

For Jesús del Toro, in Yahoo Noticias, despite the enormous social support that the movement of these young people has, “articulated for now around the slogan and label #NeverAgain, the magnitude of its objectives and its detractors requires long-lasting work that goes beyond the marches of one or several days, which are incisive and relevant but only one component of a greater activism.

IN SOCIAL NETWORKS AND OTHER LATITUDES
Alumni of the Parkland school and other allies succeeded in setting up a digital communication laboratory, designed to spread their message effectively, so that society will remember it and take it with them as a banner of peace. To achieve this goal, the teenagers took to social networks and other virtual media as a campaign scenario.

Although they did not give statements about the location of the lab, they told the press that it is especially dedicated to conceptualizing and producing content to drive #NeverAgain’s ideas and proposals for change.

With the symbology of the meme and also with YouTube videos and content for various platforms such as Snapchat, Instagram or Twitter, the #NeverAgain movement and its communications lab reflect a very unique “theatre of operations”, which Columbine did not have in 1999, for example, and prevented a horizontal form of communication, “you to you”, from reaching people better.

This showed the great national support of young people from all over the country and figures from the world of politics and entertainment. Among them, Democratic lawmakers, such as Senate Minority Leader Charles Schumer and Reps. Gwen Moore, Eric Swalwell, Paul Tonko and Sheila Jackson Lee, changed out their Twitter picture for one labeled #Neveragain.

For these, hand in hand with the youth, it’s now time to update the Second Amendment, that constitutional amendment that protects the right to bear arms.

From other geographical spaces, cut off by the proximity of digital devices, expressions of support were also made. as one Twitter user wrote: “Good luck from Scotland to all those who will be protesting in America, stay proud and speak up.

Perhaps the most encouraging thing in the midst of these actions is that, in the same country where many vote for misogyny, white supremacy, among other forms of intolerance, the same thing breaks the inertia to make change possible, precisely because of the potential victims themselves.

The result is that today it can be read on many platforms that the teenagers who survived the AR-15 attack in Parkland became gun control advocates and have not only counterpointed social networking with gun rights activists. Despite them, these students demand laws that promote safety and the right to life.

4 years ago Granma10
Life, arms and votes in America.When They Ask for Their Lives