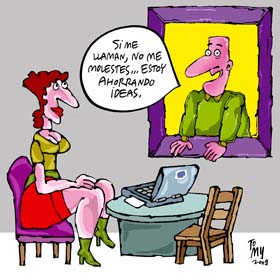 I confess I don’t know much about electricity. Both my parents are Automatic Control Engineers and still, I was not the least bit interested in the subject. Besides realizing electricity is needed to move the world, I was never curious as to how they generate it or how much does it cost. Lately, everyday we hear about the need to save it and announcements have brought the subject to the fore.

Dozens of articles on saving or wasting kilowatts, on measures to complete energy plans, on stealing electricity, and on the work of inspectors reach my hands. But, day-to-day reality is more complex. To tighten the belt of saving up to the point of asphyxia has motivated me to write some lines. First I must declare I lift a banner of rationality. I am for saving with intelligence and after proper studies.

As one who is ready to part with something very valuable, I went to the pizza place located on one side of the Trianon Theater. I was celebrating an important date and money was not the most important issue that day, or worrying about what I would do at the end of the month. If what happened to me hadn’t been so absurd, it could move people to laughter. When I ordered two pizzas the waitress answered: “From 6 in the afternoon to 10 in the evening we don’t make pizzas because we are not allowed to turn on the oven”. My mouth fell open, not because I was ready to fill it with the desired pizza, but because behind me other customers were asking for the same thing and leaving absolutely astonished.

I remember it was a Saturday and lots of people were leaving nearby theaters. Others were beginning to enjoy the night and Linea [one of the main streets in Vedado] was full of people. In the meantime, the pizza place waitresses looked very bored leaning against the counter. They were lamenting not being able to sell pizzas. This is the time when most people come by. But, we cannot sell because now the priority is saving, one of them said with the tone of one who doesn’t believe in what she is saying.

And, if this were the only instance there would be nothing to worry about. But, one of my colleagues told me the same thing happened the other night close to the Monaco Theatre, where more than three cafeterias were closed for the same reason. It seems absurd that services are not offered because of some saving plan.

Something similar happens in convenience stores, where these days the only thing we find is an unbearable heat and the dull and sweaty faces of clerks, who are more intent on feeling cooler than on selling.  How many clients simply decided no to buy anything rather than withstand such torture, and how many more bought only the most needed things to end it quickly. The pleasure of entering a store and calmly looking for whatever one wanted, or maybe even something extra, has vanished.

We might add to our prior arguments that there is also the possibility some food products might deteriorate, and that it is not very healthy to remain in closed spaces full of clients. Furthermore, if under ideal conditions sometimes clerks do not treat clients well, now it is commonplace.

Focus has been placed on the use of air conditioners, and we can understand why. But, has anyone considered that it can be very harmful to turn them off in certain places?  Is it logical to turn them off in places with no windows and full of personnel and computers? Has anyone calculated how many computers could break down because of the heat? And, could it be that turning conditioners on and off is also bad for them? How much are we really saving if later we have to invest to buy new ones?

Yes, I believe that we should save, more and more. But, we cannot grow crazy. Measures cannot be the same everywhere. We have to save in an orderly fashion.

Sometimes it is easier to get to the goal through the shortest road, or as the story goes “to throw away the sofa”. Instead, we have to analyze and study each measure to be taken.