U.S. people send syringes to save, while their government seeks to sow chaos in Cuba (+Video)

Just when the U.S. movement of solidarity with Cuba announces the shipment of six million syringes for vaccination against COVID-19, the U.S. Agency for International Development (USAID) shouts to the four winds that now, in order for the counterrevolution to access its last two million destined for subversion, it must adapt its “proposals” to what happened after July 11. 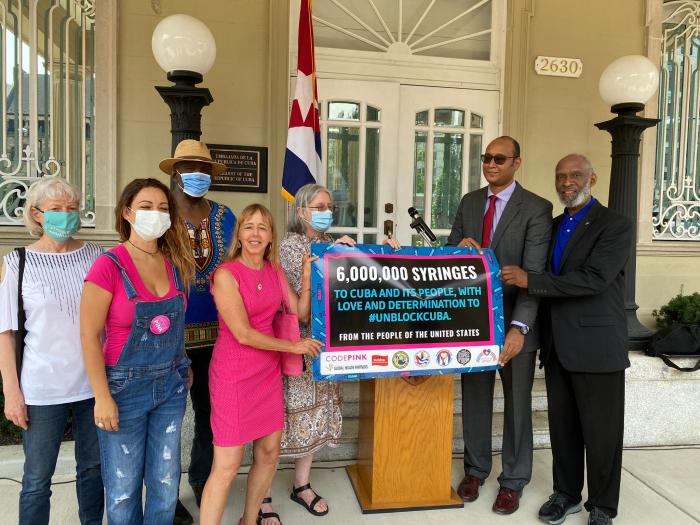 The paradoxes of imperialism are beyond absurd. Just when the U.S. Cuba Solidarity Movement announces the shipment of six million syringes for vaccination against COVID-19, the U.S. Agency for International Development (USAID) is shouting from the rooftops that now, in order for the counterrevolution to have access to its last two million destined for subversion, it must adapt its “proposals” to what happened after July 11.

They seek to fuel the confrontation, the division among Cubans, and the many lies that circulate against Cuba in the main media platforms of the world, but, above all, in the social networks.

That is the reason why now, a little more than a week after that Sunday of riots, the USAID – a public face of the CIA – discloses that it will not change its objectives with respect to the island, and that, in addition, those requesting funding must design their proposals taking into account the current political situation, Cuba Money Project published.

Last June 30, USAID announced that it would finance with up to two million dollars projects that “encourage” democracy and human rights in Cuba, one of the most obvious U.S. interventionist strategies around the world, and historically used against the Cuban Revolution.

Meanwhile, since last Saturday, July 17, around two million syringes have already arrived at the Cuban port of Mariel from the Cuba solidarity movement in the United States. This is an act of love organized by Global Health Partners and with the participation of Cuban Americans and Americans, who will continue to collect funds to also send medicines, including antibiotics, painkillers, contraceptives and vitamins.

11 months ago Granma, Translationssubversion, syringes, USAID0
No Disappeared or Tortured in CubaJuly 11, conceived in the United States