Home The Strength of Women with the Revolution

The Strength of Women with the Revolution

The Strength of Women with the Revolution (+Video)

Teresa Amarelle Boué, a member of the Political Bureau and general secretary of the FMC, told Granma that in the midst of the media misrepresentation campaign against Cuba, fighting her is among the priorities of the Federation, which will reach its 61st anniversary. 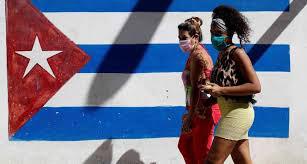 Cuban women will always be at the side of the Revolution, in defense of the principles and rights conquered for more than six decades. This was emphasized by Teresa Amarelle Boué, member of the Political Bureau and secretary-general of the Federation of Cuban Women (FMC), an organization that, with that conviction, as part of its essence, will reach its 61st anniversary.

In the midst of the media misrepresentation campaign against Cuba, she referred to Granma that fighting it is among the Federation’s priorities: “We are an organization that has legal authority, a non-governmental organization, but that does not mean that we are against the Government or the leadership of the Revolution, because it was the Revolution that dignified Cuban women and that is what we defend.

“We defend the Revolution because we want that in Cuba women have the right to employment, that there are schools, free education and that our women can be more than 62% of university graduates,” she said.

In another moment of her statements, during a meeting held with the press, she highlighted the importance of the National Program for the Advancement of Women. “Women have to know what the Program proposes; this work we are doing in the communities, the laundromats we are increasing, the strategy itself on violence, which should come out in the next few days with a legal norm; the work we are doing in the Women and Family Guidance Houses.

“We must start in the communities a workshop on gender violence, and we are also working on training the Police and legal personnel on everything that has to do with women’s rights so that they are in a position to exercise a better role in this regard.”

She said that next August 23 the FMC will reach its 61st anniversary with the motivations left by the 8th Party Congress. She pointed out that they will organize dialogues among women in each of the municipalities, and the Fidel and the Revolution of Women workshops, on the occasion of the 95th birthday of the Commander in Chief, always respecting the epidemiological norms.

Among the actions to be carried out in the coming days are a process of deep community intervention to stimulate citizen participation in the communities, as well as volunteer work, special matinees and recognitions to artists, founders and outstanding women in the fight against the pandemic.

The tribute to Vilma Espín Guillois will take place on August 23 at the Second Front, in the mausoleum where her remains rest. The commemorative day will also include the presentation of the Mariana Grajales and Ana Betancourt orders, the August 23 distinction and the 60th Anniversary stamp.