Home The Pride of Mike Jackson

The Pride of Mike Jackson

The Pride of Mike Jackson 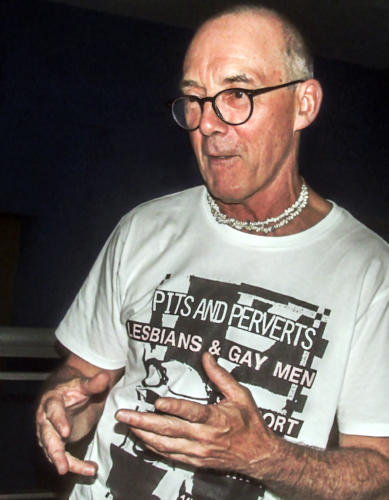 During the Gala against Homophobia and Transphobia, the English activist Mike Jackson received the Cenesex Award. Photo: Heriberto González Brito

Stephen Beresford probably found in Mike Jackson a good story to include in what would later become the screenplay for the film Pride, a historical drama about the work of a group of LGBT activists (lesbian, gay, bisexual and transgender) who raised money to help families affected by the 1984 British miners’ strike.

A long time has passed since then and now Mike has had a chance to revisit those facts. Invited by the National Center for Sex Education (Cenesex) to celebrate the eleventh edition of the Conference against Homophobia and Transphobia, the activist, is also a member of the UNITE trade union. It’s the largest in the country, bringing together millions of members from various sectors, an organization in solidarity with Cuba, shared here with the public some of his experiences with the film and the event that motivated it.

“It was during Margaret Thatcher’s second term in office (1983-1987) when she intended to close a large number of mines and put thousands of workers out of work. I was just a young man of socialist thought and a member of the LGBT community, for whom it was important not only to recognize their rights, but also those of others.

“Stephen, the screenwriter, thought the story was incredible and worth taking to the big screen. The experience was different for those of us who were part of that group. I came from the working class and it was easy for me to identify with that cause.

That is to say, during all these years millions of human beings have had the possibility of learning the real dimension of the facts…

In September 2014 it premiered in the UK and it was amazing! Many young people were attracted to it. Today, new groups have emerged in the gay community, such as those who support dockworkers and immigrants. Many are trying to do what we did at that time. We couldn’t hope for anything better!

Thanks to the film we were able to broaden our voices in the UK and in other nations, and to speak not only of struggle and commitment, but also of solidarity.

This is the first time he has visited Cuba and it has only been three weeks. However, how do you see respect for the LGBTI community (this last letter has been incorporated a few years ago and means intersex)?

I feel very safe here; there are no drug users or homeless people on the streets. Compared to London there is a great contrast. My country has lived for 40 years with strong right-wing rule, but now the new leader of the Labour Party, Jeremy Corbyn, is a great candidate on the left.

As for what you ask me, I believe that Cuba has made progress on the rights of the LGBT community, similar to my country.

If there was the possibility of a second film….

If that happens I’ll migrate to the moon!

The 11th Cuban Conference against Homophobia and Transphobia: For schools without homophobia and transphobia, began on May 4 and will run until May 18 in the context of the 30th anniversary of Cenesex, the main organizer and promoter of the event. Under the motto I include myself, this year – and for the second time – the campaign focuses on better education for the new generations.

3 years ago TrabajadoresLGBT26
Tillerson Out, Pompeo InSchool is for Everyone