A Girón in July 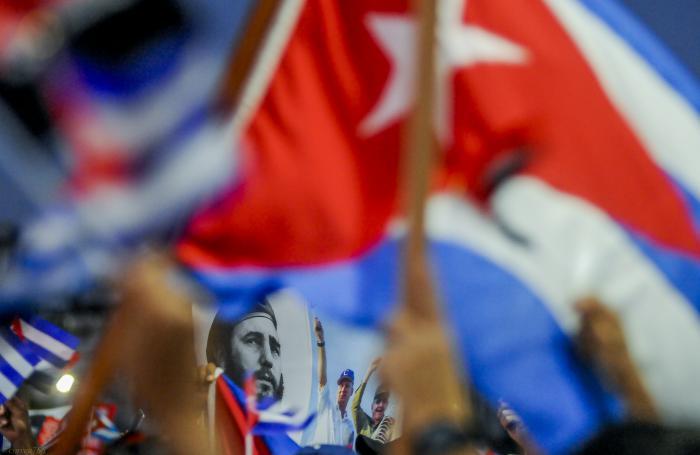 A Girón in July

This people has fought tirelessly for its independence. It wins every time they try to drown it, it stands irreverently before those who try to rob it of its right to decide how to live; therefore, it will never bow down before provocations or threats.

The month of July is for Cubans an unequivocal synonym of Revolution. Of this month is the glorious 26th, when the Apostle was reborn to guide, from the immensity of his legacy, Fidel and the entire generation that continued the irreversible path towards the full dignity of Cuba.

So much human greatness, so much sacrifice, so much history, are sacred causes; symbolic expressions of our perseverance, resistance, principles and sense of justice.

This people has fought tirelessly for its independence. It triumphs every time they try to drown it, it stands irreverent in the face of those who try to rob it of its right to decide how to live; therefore, it will never bow down to provocations or threats.

Proof of this has been the economic, commercial and financial blockade, the practice of State terrorism, the attempted invasion. And since nothing has served the overthrow plan, our enemies are betting on the so-called soft coup. The most insolent expression was rehearsed on July 11, 2021, ignorant of the depth with which the roots of the Revolution reach the bellies of those who make it, perfect it and keep it firm.

With the deployment of a large-scale political-communication operation, they wanted to opportunistically take advantage of the combined impacts of the peak of the COVID-19 pandemic, of the economic crisis derived from it, and of the measures that tightened the blockade to an unprecedented level.

The clearest objective? To generate the false idea that the shortages and material difficulties are due to the inefficient management by the revolutionary government, and to cover up the real cause: the inhuman economic siege by the United States.

Before the world, they sold the notion of a social outburst intended to “overthrow the dictatorship”. But their plan had a flaw: they underestimated the unity of the nation, the majority support for the revolutionary project, the will to not allow peace and social conquests to be undermined. That condemned them, as always, to the most resounding failure.

They have not yet understood that continuity in Cuba is not demagogy, and that defending the Revolution at whatever cost is necessary is not an empty slogan, but a firm resolution that the people unveil, putting their chest out in the face of the audacity of their enemies.

Because the dangers are certain, the Cuban people have always been in combat readiness. This was demonstrated on July 11, when they crushed that skirmish in just a few hours.

Under that precept, with an open heart, as if Fidel, Raul, Marti and all the heroes of the Homeland were speaking, the First Secretary of the Central Committee of the Party and President of the Republic, Miguel Díaz-Canel Bermúdez, called [on the people] to defend the Revolution in the streets, and the people, without hesitation, were already there.

It was an act of fidelity to the legacy of the Commander-in-Chief, who, just as on January 8, 1959, he had set the mode of action in situations of imminent danger: “I tell you that the first thing I will always do, when I see the Revolution in danger, is to call on the people. Because by talking to the people we can save blood; because here, before firing a shot, we have to call the people a thousand times…”.

And with full courage, these people asserted their condition of supreme protector of this work, and showed that the tranquility of the citizens is sacred, and that the just and sincere demand [of the people] does not need violence to be heard.

These same people are the ones who reject impunity, because no one in the service of foreign interests has the right to subvert the order of this sovereign nation.

Poor those who wanted to kidnap, for their paymasters, July 11, the date on which the revolutionaries defeated a vandalistic coup d’état.

The 26th of July is so important in the history of the nation that the month to celebrate it is so short. How can we make so much glory fit if we also add to it the crushing victory of the 11th; so similar to that 13th in which Maceo, in 1895, made an entire army of Spaniards flee in disarray in the fields of Peralejo?

For the artful mercenary attack, and for the illusory eagerness to get a “beachhead” from which to clamor for Yankee intervention, there was already a place and a date that are the most serious shame of the empire: Giron.

However, if in their servile purpose, the enemies of Cuba insist on giving themselves a Girón with each attempt, they will have one each time, as in April 1961, as in July 2021.

Revolutionary Cuba, meanwhile, remains cheerful and at peace, on the side of reason, truth and justice. We know that times are hard, but we also know that together we are capable of overcoming the pitfalls of a circumstantial reality, whose complexities are not exclusive to our country.

We continue and will continue to stand up, with a critical vision, with a transforming spirit, with creative resistance and with dreams and hopes always thought for a future in Revolution.