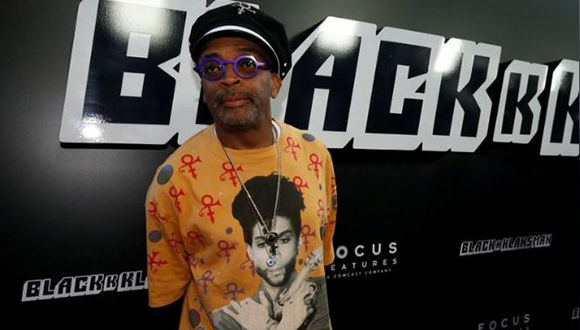 Spike Lee at the presentation of his new film. Photo: Reuters.

Spike Lee expects Trump to see “BlacKkklansman”, his film about the Ku Klux Klan, a passionate film, with moments of tension and comedy about race relations in the United States over the decades.

“BlacKkkKlansman,” based on the true story of an African-American police detective in the 1970s who infiltrated the Ku Klux Klan, hits theaters on Friday.

Lee said the film’s release is specifically scheduled to commemorate the anniversary of last year’s violent clashes between white nationalists and anti-racist protesters in Charlottesville, Virginia, in which a woman was killed.

Trump was heavily criticized last year for blaming both sides for the violence, and images of the protests are included in the film.

“I want the man in the White House to see it too. I’m not saying his name,” Lee told Reuters Television Wednesday at the film’s Beverly Hills premiere.

“When I saw the horrific act of national and American terrorism, I knew right away that I wanted to do this,” Lee said of what happened in Charlottesville.

Topher Grace, who plays David Duke – leader of the Ku Klux Klan of the 1970s – said the cast and crew were impressed by the film’s contemporary relevance during shooting.

(With information from Reuters)

3 years ago CubaDebateBlack struggle, racism37
Cuba hands over US citizenBeauty at Any Cost?