On the website of our newspaper, readers denounce, in addition to the resales, the effects suffered by the environment for their “campsites” in parks and sidewalks that count among papers and cans their shameless. 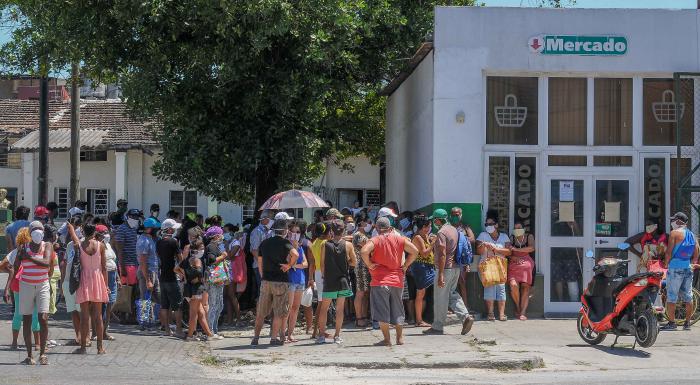 Queues and “coleros” abound in these months of COVID-19 in Cuba. Photo: Jose M. Correa

Queues and “coleros” abound in these months of COVID-19 in Cuba. They move in full view of everyone: those who mark two and three times, for several people, with the aim of selling their stuff to those who can pay high prices for rushing their time to buy. And there are also those who whisper in your ear that they have whatever you want (wet wipes, baby wipes, chicken, picadillo, oil, splits, refrigerators…), but only if you are willing to pay double, triple or who knows what number in CUC above their price in state stores. Then, to expand the resale, they even use the internet.

Like a ray of light in the midst of the global crisis, with its impacts on the internal market and the economic persecutions due to the blockade that increases the national crisis, a note from the Ministry of the Interior recently revived public debate on the subject, stating that more than 1,285 “coleros” had been sanctioned in Cuba since the beginning of the COVID-19 pandemic.

In view of this figure, which in the opinion of some will increase if the gravity of the situation is taken into account, the indolence of people without social commitment, dedicated to the transfer of products necessary for families, in the midst of a context of lack of supplies and national health emergency, comes to public attention.

One could come to doubt the humanity of these beings who, moved by individualism, forget that children, the elderly, pregnant women and the sick will not have the opportunity to obtain what they need.

On our newspaper’s website, readers denounce, in addition to the resalers, the effects suffered by the environment due to their “camping” in parks and sidewalks that count among papers and cans their shamelessness.

In the case of the severity of the sanctions that these individuals receive, diverse were the petitions to correct, energetically, these types of acts. Remember, the majority of those punished by the law only received fines of one hundred to 300 quotas, a minimum amount compared to the profits generated by the collapse of the sales system in the stores and the hoarding of products.

The so-called “lists”, supposedly created to organize the queues with tickets, numbers and shifts, also cover up the activity of the “coleros”, many of whom are the same organizers of the queues in the shops from the early hours of the morning.

If the authorities already have an identity card scanning system that allows for the order and control of this process, it should be used in the best possible way so as not to leave places available for other modalities.

Control within the stores should also be improved. An efficient service depends, in addition, on the organization and rapidity at the time of collecting the products, the personalized treatment to the client and the administrative vigilance towards the workers, demands that are frequently repeated.

Some people have proposed the use of the ration book [the libreta] as a mechanism to control the distribution of products in times of crisis like these. Something that has already been explained, since the country does not have the millions of dollars needed to carry out such a distribution.

Many other citizens request a greater supply in the stores, despite the effort that it means for the country to maintain them and in view of which alternatives for their re-supply have been generated.

The issue is not new. Among the greatest discontent is that the coleros still exist and cloud a trade already hit by the crisis and the economic, commercial and financial blockade of the United States. The cooperation of all could be the key to success in putting an end to the speculators, but greater control and a more effective complaint mechanism are needed,  The will of the people is evident.

2 years ago GranmaColeros, economic crime0
Belarus and the Rearview Mirror...In Black and White