Solidarity with Yanay, discriminated against because of the color of her skin 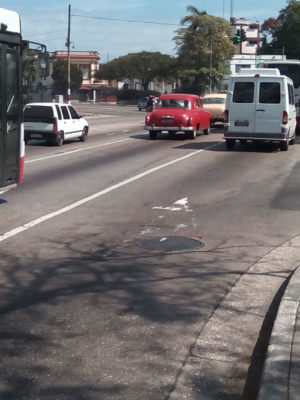 The driver of the red car –center of the photo– with license plate P158682 forced a passenger to leave the vehicle because she is black. Photo: courtesy of the sender.

Since the publication, last Monday, of the article “Discriminated against on the basis of skin color”, we began receiving multiple messages from our readers through social networks, the website, section Buzón abierto [Open Mailbox], and phone calls. For the most part, these showed outrage at what happened, and supported Yanay, the Artemisa student, in her complaint.

It is worth noting that, in a few hours the item was positioned among the most read in our web edition and has remained so during the week.

The initial statements focused on astonishment and outrage at the fact that in 21st century socialist Cuba there was evidence of a scourge that many believed was eradicated: racism.

“This guy offends so many good Cubans who fought and gave their lives to sweep away these manifestations,” says Eddis Armin Pérez Calzadilla.

“We cannot allow such a serious offense: we are all equal here,” says Ana Griselda Rodríguez, neighbor of Santiago de las Vegas in the capital.

“It is an affront not only to the girl, but also to our society,” said Internet user Marco Velázquez Cristo, “because such conduct harms the dignity of the people and the values we defend. This is unacceptable.”

Then the comments got hotter, because they claimed that the action was a crime punishable under our laws, and urged Yanay to make a formal complaint. Most opinions demanded a punishment for the driver of the vehicle, on the understanding that such attitudes should not go unpunished.

“I hope the courts act strongly against the driver. For the young woman, a hug. We are not black or white, we are Cubans,” wrote Ibrahim Almaguer Legrá, via email.

Rivera warns that these racist behaviors have gone too far, not only among the boteros [self/employed car owners offering public transport service], but even in the paladares [private restaurants] with their employees. “The problem goes far beyond,” he said.

Another forum writer, Enrique Martinez, said, “Wow, now do not tell me that there is no evidence or that it is her word against his. The important thing here is to reject such an attitude. People can and must punish him. If Cubans contributed to doing away with apartheid thousands of miles away, how can a racist person be allowed to display his arrogance here. At least let’s make him swallow his racism.”

Among the many opinions, only that of a reader who calls himself Esteban does not see anything alarming in the story. “He did not ask her out for being black, but because he was ending the tour and she got offended when he called her by the color of her skin.”

We must add that a few minutes ago we received a call from the “Jose Antonio Aponte Committee” of the Union of Writers and Artists of Cuba (UNEAC) taking an interest in the facts and congratulating our team for the publication.

The senders want to know what happened to the driver and what will the authorities do. They and we “expect a STRONG response.”