Seven Coincidences between Nicaragua and Venezuela

Seven coincidences between the violent protests in Nicaragua and Venezuela 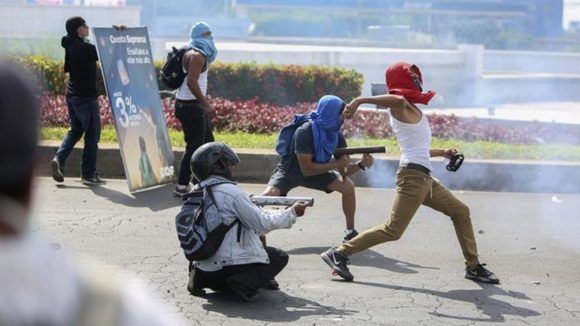 Metras, mortars, rockets, among other implements, are used by mercenary collision groups in Venezuela and caused damage to Adrián Duque, Armando Cañizalez, César Pereira, Diego Arellano, Miguel Castillo, Roberto Durán and Yeison Mora, who were killed by metal spheres or by civilians from the same side of the demonstrations. Andrés Uzcátegui, Nelson Arévalo Avendaño, Neomar Lander and Engelberth Duque Chacón were also killed handling handcrafted explosives.

During the violent protests in Nicaragua, armed groups taking the vanguard use similar devices.

In order to avoid confusion because of the similarity of the images, the first photo corresponds to Venezuela and the second to Nicaragua.

[link to many Twitter images of Venezuela in 2017, wl] https://twitter.com/dsmolansky/status/850804443557888000Walter Lippmann This is a translatlion from Cubadebate of the Chavista-Venezuelan MISSION VERDAD commentary on the similarities betwee the recent Nicaraguan protests and the violent protests in Venezuela last year.

The photos are from Venezuela last year, 2017.

Trying to emulate that same sense of opportunity, in Nicaragua the use of rumor was used to link the government to the use of chemical weapons, a lie that, although it fell, was useful to the oxygenation of violence via social networks.

In Nicaragua, the international media is chorus of ghostly “reports” that place the death toll at over 20, unable to say whether they are confirmed or not.

Applying the same disinformative maneuver, it attempted to hide the fact that in 2017, for example, 25 people died in Venezuela who were passing through the vicinity of a demonstration but were not directly involved. Cases such as those of Almelina Carrilo (Caracas) or Paola Ramírez (Táchira), murders committed by opposition demonstrators, were used as media triggers to escalate the violence by holding the government accountable without any judicial resolution of the cases.

Similar events occurred in the municipality of Chacao, Miranda State, Venezuela, when anti-c

Chavista-funded clash groups set fire to and attacked public buildings such as the Executive Directorate of the Judiciary of the Supreme Court of Justice. This is just one small example of the burning of public transport units, libraries and hospitals during 2017.

The journalist Angel Gahona, from a state television channel, was murdered on Saturday night while he was broadcasting the events on Facebook Live in Bluefields, Nicaragua. He was walking behind the police forces and a gunshot shot him in the head in front of dozens of people. From April 11, 2001, through the Euromaidan to Nicaragua, snipers have been a recurrent resource in coup operations conducted from the US.

In Nicaragua this resource has also been applied through international musical references, Miss Nicaragua 2018 Adriana Paniagua and other characters from the local entertainment industry.