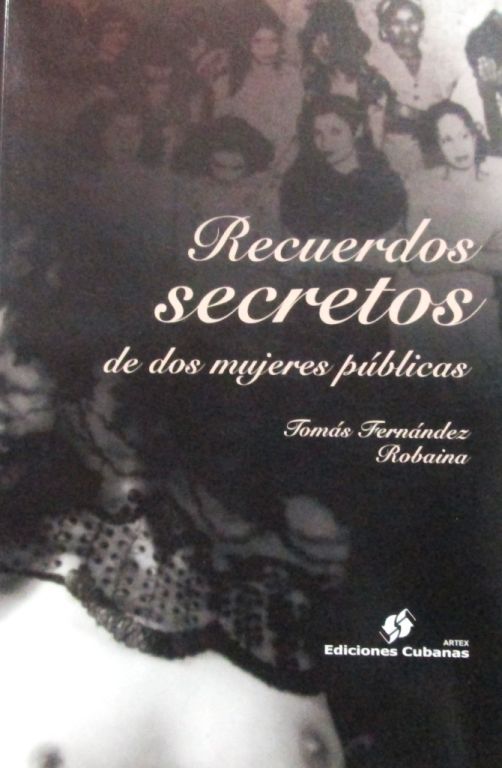 “Before I could understand a woman sleeping with a man for money, whether she liked him or not, but now? Not now. We all left the business when we were given the opportunity to do so. For some, it was not easy to change, especially for the older ones”.

Thus confesses one of the voices that appears in Secret Memories of Two Public Women (Ediciones Cubanas Artex, 2015, 144 pp), in which its author, Tomás Fernández Robaina, through various testimonies, proposes a look, at the past and the present, of prostitution in Cuba.

In two chapters, thought out and created with skill and dexterity, stories are told that shake and move. They are stories of life, intelligently enriched with various documents – such as texts from newspapers, excerpts from books, lyrics of songs… – that contribute to understanding, in all its dimensions, the complex phenomenon of prostitution.

This installment opens with the testimony of Violeta and Consuelo, La Charmé, two women who practiced one of the oldest trades in the world, who tell of their lives before the triumph of the Cuban Revolution and in the first months after the popular victory of January 1, 1959.

Also of great interest is the reading of the second part of Secret Memories of Two Public Women, in which Tomás Fernández Robaina brings together “other voices (that) will speak of their times and existences, not as secret memories, but as current experiences”.

In this second chapter, we can read heartbreaking testimonies that move us to indignation and compassion at the same time. Here is one of those confessions:

For me, it made no sense to continue studying. Some of my little friends had dropped out of high school and launched into the struggle. It was not always easy for them with their families, but later when it was seen that through this path of struggle they were resolving many things that were essential for the daily life of their relatives, what they were doing was seen and valued as something “normal”.

When you see that others have everything, because they are in the struggle, just as I am now, or for other reasons, you break something inside; you want it and you don’t want it, because our parents taught us other rules of life, but they don’t fit, because even by sacrificing they can’t provide what their children really need.

Author of wide research, mainly related to racial issues, Tomás Fernández Robaina (Havana, 1941) has published, among other titles, Bibliography of Afro-Cuban Studies, The Black in Cuba 1902-1958, Speak Paleros and Santeros, Cuba: Personalities in the Racial Debate and Afro-Cuban Identity: Culture and Nationality.

In Secret Memories of Two Public Women, which had a first partial edition in 1984, you will find -in the words of its author- voices of yesterday and today that, in a clear and honest way, reveal their sadness, longings, frustrations, rages, contradictions, disappointments…

A revealing book, that testifies, in two time periods s, a similar phenomenon, although sustained in diametrically opposed realities. A book that, through its pages, makes it possible to rescue, for today and tomorrow, a sad chapter of the collective memory of the Cuban nation.