Home No Export Industry Without Design

No Export Industry Without Design

We Cannot Conceive of an Export Industry Without Design

By Liudmila Peña Herrera
Cuban journalist. Graduated in Journalism from the Universidad de Oriente, in Santiago de Cuba. She works for the weekly Ahora, in Holguín province.
and 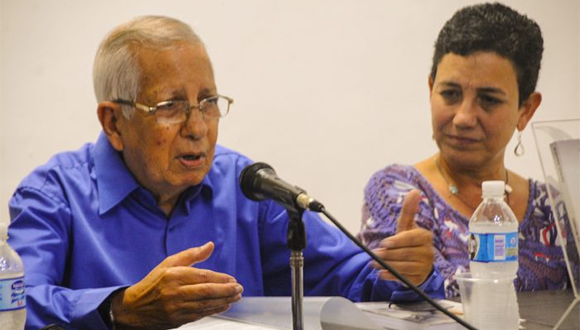 Leonel Amador, during the presentation of one of his books. With him Gisela Herrero, head of the National Design Office. Photo: ONDi.cu

With all the experience and prestige gained by a broad and multifaceted work in the field of light industry over more than six decades of work, chemical engineer Leonel Amador Perez, today an advisor to the Minister of Industries, is an authoritative and proactive voice in the attempt to insert Cuban design in the quality standards of national productions.

A perfumer by profession, Leonel Amador became involved from a very young age – at just 16 – in the fascinating world of fragrances. He himself defines the year 1958 as a determining moment in the destiny that would follow after entering the Rancho Boyeros Technical-Industrial School.

“At that time, the advertising of the big soap companies on the radio and television was very appealing to me. That’s why I chose the specialty of Soap and Perfumery”, remembers who began his professional history in the aerosol filler, in Havana, where they produced the sprays for various cosmetics, perfumes, shaving foams of different brands and many hair products.

His experience in this sector would be enriched in the Burjois Perfumery, producer of Chanel No. 5; then, in the recently created Empresa Consolidada de Jabonería y Perfumería, and later in the Laboratory of Development and Production of bouquets, currently Suchel Fragancia, of which he was one of the founders and its first director, at the age of 23. If such merits still seem insufficient, he is endorsed by having been director of design at the Ministry of Light Industry and winner of the National Honorary Design and Design Management Award, both granted by ONDi.

So many distinctions do not spoil his humility. In the way he conducts himself with his colleagues, there is not the slightest hint of the egocentrism that usually originates such entertainments; on the contrary, in his slow speech and in the frank and clear dialogue, like the essence of one of his perfumes – Alicia, inspired by Prima Ballerina Assoluta -, one can guess the peasant roots of which he assures he is proud.

His tenacity in work and the energy he gives to that passion, make him “jump” to the laboratory from time to time, to compose some fragrance (the last ones were S Hojas de Tabaco Verde, Súcheli Flores Blancas and Insaciable). For him, talking about the challenges and the need to incorporate design solutions into the daily life of a country that is destined to promote productive chains is an obligation, but also a pleasure.

What policies have been developed within the Ministry of Industries to contribute to the productive linkages that, according to the economic authorities, the country needs so much?

-This is an expeditious way for economic actors involved in a production chain to obtain benefits. Logically, the development of one activity drives that of the others and, strategically, it is beneficial and very effective. This policy, within the Ministry of Industries, is not new, since it was born with the Revolution itself and the ideas implemented by Che, who conceived the Cuban industrial development through the productive chains. That is, if we were going to produce coffee, then we would develop the production of the sack and, for that, we would have to produce the fiber, for which purpose the agricultural crops of the kenaf were planted. Today, the policy and programs of industrial development until 2030 take into account these productive chains.

How do you assess the degree of insertion of Cuban design in those chains?

-The insertion of design in the productive chains is vital, although in some processes it is not given the importance it deserves, even when, strategically, it is essential.

“Today, the quality systems that are implemented throughout the industrial plant are based on the evaluation and validation of the design, not only to have a well-assembled quality management system, but also to avoid defective products that do not meet the needs for which they were created. For this reason, design, both industrial and visual communication, plays a very important role in the development of production and in the levels of satisfaction that products and services must achieve.

“We still need to promote it more, because it is not at the center of the company’s management development, even though there are some who have understood the importance of design management, to the point that today they are successful entities in their product development policies.

“It may be that those working in the industry are not always aware of the importance of design, but neither does ONDi and designers have to wait until they are. I believe they should play a more active role in demonstrating the opportunities offered by design as a tool for achieving higher rates of product competitiveness. We cannot conceive of an export industry if it does not have good design. And this is within the policies that the ministry is developing.

“At the moment, we are working on various aspects of the issue. For example, along with the industrial development policy, there is the packaging policy and the design policy; all this so that there is a guiding document in the country that can show us the way to achieve greater efficiency and competitiveness in the product range through design”.

How could designers play a more proactive role in raising awareness of the importance of design?

-There is no one who knows more about the importance of design than the designer himself. We need to get rid of the complaint a little. We need to talk, convince and show more what can be achieved. We must not allow valuable projects to be drawn up and then archived. We have to fight to get these good projects into production.

“Design work must be seen from the industrial management itself, but that is achieved by educating and demonstrating. We developed an experience 25 years ago, at the end of the nineties, with a diploma in management of this activity, at the Instituto Superior de Diseño (ISDi). Thanks to this action of improvement, a group of industry leaders, including me, who was then a vice-minister, prepared ourselves in the most important aspects related to design. Because of those relationships I had with ONDi, I also participated in international events, always presenting papers on the color-smell relationship in the design of packaging for the cosmetics industry and on experiences in design management.

“We also promoted, in coordination with ONDi and ISDi, the experimental reorientation of higher level graduates. It was not a question of improvising designers, but of enriching with these tools professionals who, with a knowledge base such as industrial engineers, chemists, textiles…, could influence, from the industry, design management.

“I owe a lot to the designers I met during the 23 years that I attended to the activity at the ministry level. José “Pepe” Cuendias was a brother…

(Our interviewee briefly interrupts the dialogue. He is moved by the memory of the former director of ONDi and rector of ISDi for so many years. Before our eyes, he is no longer, for a few minutes, the advisor; now we see him in the skin of the friend. He breathes, and continues).

“My relationship with him, in the framework of work, was very close. We planned the training activities together with the staff of the institute. I was also nourished by boys I had known since they were students: Pedrito (Pedro García-Espinosa), Sergito (Sergio Peña Martínez), Giselita (Gisela Herrero García), Carmita (Carmen Gómez Pozo)… There were very talented designers in the industry itself, from whom I learned, like Rafael de León -National Design Award in 2005-, a costume designer for Tropicana and for Vanessa’s trunks, who is very well known internationally”.

How do you assess, from your work experiences, the industry-design relationships over the years?

-In the seventies of the last century, there was a Design Department in the Ministry of Light Industry, whose creation I defended a lot because there was a similar one in the Ministry of Industries of Che. In 1980 the ONDi was created, and the relations between both institutions led to the emergence of design centres in the 1990s, by branches: clothing, footwear, furniture. It was then that, as Vice-Minister, I started to attend to the activity.

“The fact that later the presence of design in industry has been blurred is due to an essentially economic factor. For there to be design there has to be production, and today access to the market for national products is limited by financial problems. We must therefore ensure that part of the solution to this situation is design as a tool. At present, the linkage of the tourism sector and the furniture industry is a positive example. It is satisfying to see the furniture in hotels such as Paseo del Prado, for example; anyone would think that it is not Cuban, and yes, it is manufactured in an industry that is part of that productive chain that we are called upon to promote.

“When you think about how this chain is carried out, you have to take into account that furniture means wood, varnishes, nails, screws, upholstery materials, the clothes of the factory workers, their shoes… Let’s analyze how many things are derived and we will see that it is a big chain in which design plays a fundamental role”. 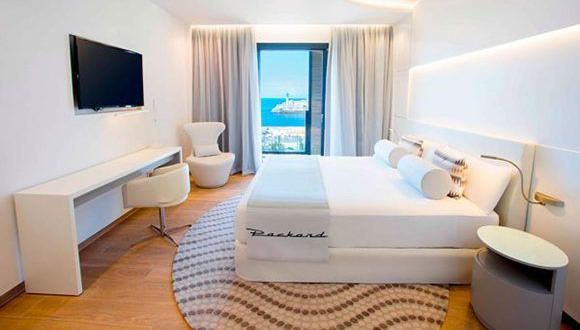 At present, the linkage of the tourism sector and the furniture industry is a positive example. Image: ONDi.cu.

In his speech to the National Assembly of People’s Power in December 2019, President Miguel Díaz-Canel posed the challenge of “conquering the greatest possible prosperity”, even in the midst of the economic war we are facing. How can we accompany this objective from industry, from design, in the medium term?

-For me, Cuban industry is committed to be better, to overcome every day, and it will achieve it by working more efficiently and effectively, developing the products that Cubans want and deserve. In that challenge, design is an essential tool, because with it we can adapt the product to the needs of the population in an optimal way.

“Likewise, ONDi must use all its experience and knowledge to help raise awareness among industry specialists and to definitively materialize the use of design in each work, product or service that will be made available to our public.

“It must never be forgotten that if you do not have a design that is competitive with the international average, it will be very difficult to export. To achieve this, you must have stable quality and be very punctual with design solutions”.

In July 2020, ONDi celebrated its 40th anniversary. What idea or message would you like to convey to your collective, who are committed to making Cuba a country of good design?

-We must continue to maintain our professional commitment as we have done up to now, and even more. I know the spirit of work of the office, the battle of its designers who radiate a willingness to help in everything they have been asked to do. I just want to invite you to continue to be an example of that passion for design. That needs to be multiplied.