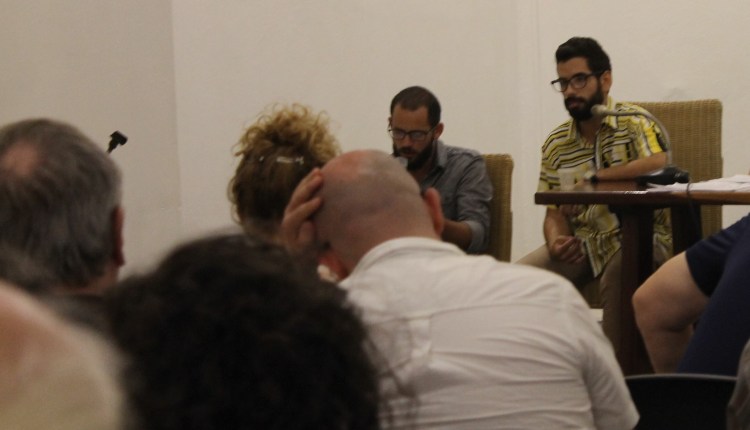 Yunier Mena is a young Cuban student who attended the León Trotsky International Academic Event held in Havana from May 6 to 8 of this year.

Ubaldo Oropeza (UO) – First of all, I would you like to know what you thought of the meeting about Trotsky?

Yunier Mena (YM) – What I liked most about the academic meeting about Trotsky was the fact that I felt among communists, apart from the profound and just ideas I could hear.

UO.- I have noticed, since my previous visit to Havana, that now there is a different atmosphere, a lot of business, a lot of shopping, a very strong market environment, I imagine that, as you say: “feeling among communists”, is like breaking with something that has been growing in Havana.

YM.- In Havana and throughout the country, even in the Constitution of the Republic, there is an advance of capitalism, in my opinion. There is private property, money, and goods that do not come commonly through the channels of the State enter the country and this creates a mercantilist and unpleasant situation in the country.

UO.- As a young person, do you think that young people are inclined to capitalism, to pay more attention to consumption than to understanding what is happening?

UO.- I’m asking you that because when the Soviet Union fell many young people were inclined towards capitalism. As you say, in the youth there is everything, but the great majority has been depoliticized. Besides, the vast majority of the youth, the only thing they knew about socialism was the iron grip of the bureaucracy. The old revolutionary traditions of Lenin’s and Trotsky’s time were forgotten and distorted. What do you think of this situation, that at a time when youth have to choose capitalism or a planned economy, where they would turn?

UO: At a time when private property is advancing and the market is advancing, that false certainty of the people about the supposed success of capitalism is being reinforced.

The confidence that now exists in capitalism, what is the reason for this? I think there are two factors, on the one hand the control of the government bureaucracy, which eliminated workers’ democracy, direct participation in the decision-making of the working class, and on the other hand, the economic blockade that prevented industry from developing, and of course, the isolation of the revolution.

YM.- People’s support for capitalism has to do with several questions, on the one hand, capitalism itself, how it works, its human relations, its cultural and ideological dominance makes people think that it is the only thing they can have and aspire to. There is an ideological domain that makes people support capitalism. They think that society can only function that way. The apolitical nature of young people is due, on the one hand, to this natural reproduction of capitalism in the ideology of people who participate in economic activities and relations that have to do with capitalism.

Che said that man changes while reality changes, I agree with him, I think that the state that functions vertically cannot lead us to socialism, because man does not decide for himself, does not construct reality by himself and cannot transform himself. This apoliticism cannot be transformed until man is directly responsible for his future. Until the decisions that are taken are taken by the same ones that fall the results of that decision.

UO.- Finally, there is a very complex situation at the moment because the policy of American imperialism is being very aggressive in Venezuela, trying to hang the revolution that overthrows Maduro. It also has it with Cuba, even a few days ago the so-called Helms-Burton law has been retaken which proposes restricting the sending of money to Cuba to a maximum of $1,000 every three months, lawsuits by capitalist companies that were expropriated in the revolution, there is talk of a total blockade. There are complicated periods in sight for Cuba. What do you think the youth have to do, like you, who think that capitalism is not an alternative and at the same time opposes any imperialist intervention?

YM.- I think that we have to fight without fear against imperialism and against the bureaucracy that prevents socialism from advancing. What is needed is for people to build their own reality. We must consciously oppose capitalism, confront imperialism.

One of the things I sensed in the meeting about Trotsky’s ideas is that we are not alone. That there are people in different parts of the world who oppose capitalism. The support that Cuba and socialism has in Cuba was also shown. I think that it is important to defend Cuba and that we Cubans know that we are not alone, there are many people in the world who support us.

This socialism has many problems, but it can be improved and not go to capitalism. The possible socialism that we need is not the one that asks for capitalist participation, like private property or organized production over workers. We have to satisfy collective needs, we have to produce wealth organized by the workers themselves.

I think that this country needs to produce wealth, and this wealth is not produced by capitalism. We can produce wealth in a socialist way and distribute it better and discourage ourselves. Not to fall into the game of capitalism, capital is not interested in collective human development. Only democratic and productive socialism can promote solidarity and human development.