Florida: Pandemic’s Epicenter in the U.S.

Florida: Epicenter of the Pandemic in the U.S.

Unfortunately, at the beginning of this week, this territory has registered almost 25% of the hospitalizations due to COVID in the whole country, despite the fact that Florida represents only 6% of the total population of that nation.y 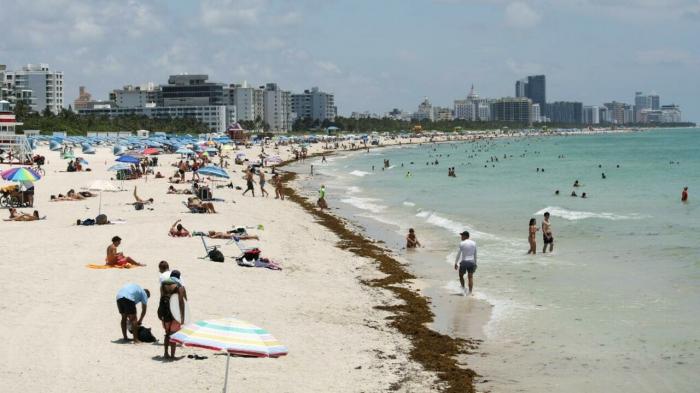 General view of a crowded beach in South Beach, Florida. The state accounts for nearly 25% of COVID-19 hospitalizations in the U.S. Photo: Reuters Photo: Reuters

If truth, not interference and hatred, prevailed in our world, a “humanitarian intervention” would be called for right now in the state of Florida, the current epicenter of the peak of the COVID-19 pandemic in the United States.

That territory, unfortunately, is the site of nearly 25% of the nation’s COVID hospitalizations this week, despite the fact that Florida represents only 6% of the nation’s total population.

Also of concern is that Miami-Dade, the state’s most populous county with some 2.7 million people, has been the number one county for infections and deaths throughout the pandemic and remains so today.

However, after Florida reached 21,683 new cases this Saturday, the state governor, Republican Ron DeSantis, continues to resist issuing an order for the mandatory use of masks and the requirement of vaccinations by employers.

But there’s more: Florida Republican Senator Marco Rubio noted on Twitter Monday that there is a “hysteria” by the media regarding COVID, “because bad news sells.” And he stated, “The real story here is how, for fully vaccinated people, the risk of serious disease appears to be close to zero.”

However, data from the Johns Hopkins University show that Florida is the third state in number of cases and the fourth in number of deaths in the entire United States, the country most affected by the pandemic in the world, with more than 35 million infected and 613,000 deaths, as of March 1, 2020.

To give a more complete picture of the situation in the nation, some 72,000 children and adolescents contracted the disease in the week of July 22-29, a figure five times higher than in the previous month, according to the American Academy of Pediatrics. And 20,000 of these cases are in Florida.

Now, what is the other reality that can be observed today in the territory: On the one hand, what has been described above and which reflects how the COVID-19 with its new Delta variant is hitting the Floridian population, and on the other hand, the Republican government there, as is also the case in Texas, is adopting resolutions so that the inhabitants, including children, do not use masks or have to apply social distancing measures, as warned by health authorities.

Next week, students in that state will resume classes in person, and the use or not of masks by students is also part of the political debate, an aspect that has become a business, since parents who do not accept such measures are encouraged to transfer their children to private schools, where regulations could be more flexible.

Therefore, it should not be surprising that in Florida and, specifically, in Miami, the beaches are crowded with people, mostly children and young people; that bars and other entertainment centers are open and that this is the other side of a reality that, unfortunately, is already lethal.

In this situation, White House spokeswoman, Jen Psaki, declared that while 25% of the hospitalizations in the country are in Florida, the governor (DeSantis) has taken steps that go against the recommendations of Public Health. She added: “The situation is too serious, deadly serious, to act in a partisan manner.”

What proposals for a solution would be given by those who, right there in Florida, have asked President Joe Biden for a humanitarian (read military) intervention against Cuba. Or is it that the dead and the infected in Florida do not count when it comes to politicking, as Marco Rubio and other feverish promoters of hatred, the blockade and the attacks against our Island do.

5 months ago Granma, TranslationsCovid-19, Florida, Marco Rubio, Ron DeSantis0
NYT: No Evidence of Sonic Attacks Our Duty is With the People