Harassment Debate Asks Men to Put Themselves in Women’s Place 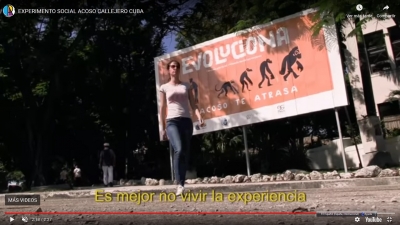 Fear, shame, fright, confusion, astonishment and discomfort in the face of the situation are just some of the reactions that several Cuban men said they felt when they were harassed in the street by a woman. Such unusual scenes are part of a social experiment carried out by the Oscar Arnulfo Romero Center (OAR), which toured the networks in the form of a video and reflects what happens when harassment occurs the other way around and it is women who verbally “assault” men.

At phrases like “you’re super cute,” “how hot you are,” “I didn’t want to know the time, what I wanted was to talk to you, mess with you because you’re divine,” or “kidding, but please believe me,” the men who were harassed felt assaulted in various ways, as they said after being informed that it was a hidden video.

“I was ashamed to see a young girl, pretty, giving herself away, saying: look, I want to go out with you, because it’s very strange”, said one of the interviewees.

Another of them claimed to have “gone blank” at the approach of a stranger, while a third said “he felt attacked, because the form and the words he used were not correct”. She added, however: “with harassment there is nothing right, everything is unpleasant, it goes against the integrity of the person”.

“I thought I was crazy, because the man is the one who always harasses the woman, not the woman harassing the man”; or “I got scared, I felt nervous, this is the first time this has happened to me” were feelings that the experiment generated for them.

“We are trying to make people think about and respect the individuality and integrity of human beings, so that everyone can decide what to do with their body, who touches it or not,” said the director.

The controversy about what to understand by sexual harassment also emerged from the comments of the men interviewed. This was in the face of ideas such as their dependence on the way in which they address women, or the conception of the so-called compliment as “something of our idiosyncrasy that should not be lost, as long as it is said in a nice way, with respect”.

“Harassment is a crime, but it is not the same to interfere with them as in fooling around than to harass them” or “it depends on the woman, in the way in which it is done: it is not the same as a compliment or disrespect” were other opinions of the men, many of whom agreed that harassment is not seen well in a woman, but in men it is “normal”.

This social experiment is an idea of the members of OAR’s Youth Articulation Network and is linked to the approaches of the Evoluciona campaign, which conceives street harassment as an expression of male violence.

Widely socialized on the networks in recent days, its publication coincided with the International Week against Street Harassment, an initiative that was born in Peru in 2011, and seeks to inform women about their rights and condemn any form of sexual violence in the street.

For journalist Dainerys Mesa Padrón, who is a member of the campaign team, this experiment opens the fingerboard on an edge of women’s body control and social relations. At the same time, it contributes to the discussion of street harassment in Cuba and its naturalization [acceptance], because it is associated with traditional cultural practices.

“It is essential to change the belief that our self-esteem depends on compliments, on an opinion about our body or clothes in order to feel good. [These are] ideas that most people assume to be normal, when it is a clear symptom of violence against women,” she said in the making of the video. 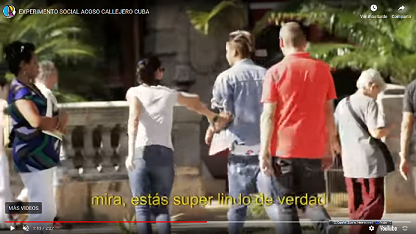 One of the expressions of gender violence is sexual violence and, within it, sexual harassment is one of the most invisible, minimized, legitimized and silenced forms of violence, psychologist Mareelén Díaz Tenorio, an OAR specialist, told SEMlac.

“We are talking about various practices of a sexual nature and connotation, unwanted and offensive, that do not consider the impact on the recipient. They are intrusive and have repercussions for physical and psychological integrity,” she said.

The psychologist indicated that the contexts in which sexual harassment occurs can be institutional (work, educational, religious), family, public and social networks (cyber-harassment).

Street harassment occurs precisely in public spaces. “It is carried out by unknown people and it is less visible because it is legitimized by culture,” she said.

“Many people legitimize the compliment at all costs because they consider it a cultural tradition in the Cuban context. The ablation of the clitoris is a practice of certain cultures and does not stop being extreme sexual violence,” said Díaz Tenorio.

In her opinion, there is a social imaginary in which women exist as objects of sexual desire and it is “normal” to judge their bodies and use them without their consent. In the public space, practices are seen as “natural” that cannot be cataloged as compliments, but as authentic expressions of sexual harassment. If they are not recognized as such, we are guaranteeing their perpetuity, their injustice and the harmful consequences for the victims (not only women, but also girls), she said.

For María Teresa Díaz Álvarez, also an OAR specialist, the so-called compliment becomes street harassment when it involves insult, imposition, and the intention to bend. “Then it becomes a pattern of abuse,” she warned.

Oxfam’s report “Breaking the Moulds: Transforming Imaginaries and Social Norms to Eliminate Violence” found that among the young Cuban population, “complimenting” women is still seen as logical and normal.

With the participation by Cuba in the Center for Psychological and Sociological Research, in collaboration with OAR and Oxfam in Cuba, the investigation concluded that 75 percent of young people between the ages of 15 and 25 accept  street harassment (whistles and compliments) as natural.

The study delved into youth images regarding violence against women and points out that more than 81 percent of girls and boys think that most of their friends see this behavior as normal.

On the other hand, several young people from different age groups and territories linked these demonstrations with provocative actions by women in their attitude and way of dressing. Others placed responsibility on the beliefs and social norms that condition these machista and stereotyped practices.

Liset Imbert Milán, OAR’s legal advisor, told SEMlac that harassment is not expressly regulated today, as it does not appear in any legal norm. [there’s no law against it, ed.]

She pointed out that the new Magna Carta endorsed last February opens the doors in its article 43 to improve and include these issues in the rest of the laws, insofar as it states that “it protects from gender violence in any of its manifestations and spaces, and creates the institutional and legal mechanisms for it”, and harassment is a form of violence.

In this regard, the Evoluciona campaign has found echo in many voices, individuals, groups and institutions that join the strategy of awareness, largely youth, in the opinion of Diaz Tenorio.

“Of course there is resistance. But the inert is not the polemic. The indolent would be the absolute acceptance of harassment as `natural´ and indifference. If there is controversy we are on the road to change, which will occur when the insertion of women’s rights in the multiple ways of education and spaces of socialization of the country,” said the expert.

In addition to the social experiment, broadcast on television and social networks, during the International Week against Street Harassment, workshops were held on communication and equity, exchanges with young people from the University of Havana, polytechnic and pre-university students from territories such as Jobabo, in the eastern province of Las Tunas.

The social networks were flooded with messages from audio-visual directors, singers, journalists and other opinion leaders about why street harassment should be eliminated, generating multiple comments and positioning interesting like #PonteEnMiLugar.

3 years ago TranslationsGender Violence, sexual harassment0
Graphic against family violenceWho Will Be the War Candidate in 2020