Bucanero and Cristal at Way-Too-High Prices

Bucanero and Cristal at High Prices in Private Sector, But Gone From State Stores 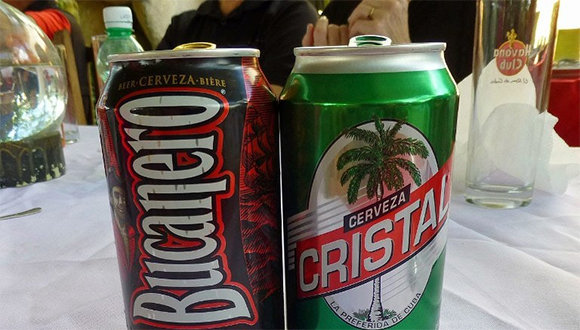 At 200% of your selling price, maybe 250% of your cost price. For someone who didn’t invest a drop of sweat in producing them. Only in Cuba. Photo: September 5.

Surely the high temperatures of these days has evoked thoughts of having a beer to cool off. Perhaps you have decided to have a family reunion and, why not, taste a Bucanero or a Cristal. If you don’t change your brand (and quality), you have a very difficult time.

For some time now, it has been difficult to find the two emblematic beers produced domestically in the chain stores. However, in the private gastronomic establishments, restaurants, bars and/or cafés they are can always be found without problems and at a price that sometimes (according to “cache”) doubles their original price.

It’s really incredible: at 200% of their selling price, perhaps at 250% of their cost price. For someone who didn’t invest a drop of sweat in producing them. Only in Cuba.

What is the source of supply for those private “paladares” if, for example, in the TRD Caribe chain, only two boxes per person are sold (if the regulations were really complied with)? How many times should the waiting lines be or how many should accompany the owner of the restaurant in order to have a sufficient quantity to maintain their supply in a constant manner?

It is worth looking at this phenomenon, especially because it advocates not raising prices and because it causes equitable access to products of all kinds. Let’s remember that the country has already implemented measures of various kinds, including setting up a store for self-employed workers.

For none of us, it is a secret that there are not a few citizens whose livelihood depends precisely on being aware of how much is on sale in the CIMEX stores and the former TRD stores, in order to access as much as possible and then make a profit. Logically, however, they are not “fortune-tellers” nor do they have a particular information system that knows where things are and when.

They have their information system and their source of supply in the stores themselves. If not, how is it possible that they are almost always the first to acquire from an affordable price for the beers that have motivated this comment?

If not, the press will continue to denounce and, unfortunately, things will remain the same. This generates discredit, and not only in us journalists.

This can’t be the never-ending story. Nor does it deserve the disdain or lack of attention of all those who – in acting jointly – can and should close the way to this issue. Far from becoming a solution, has today become a problem since, on the one hand, access to beer is limited and on the other, it impacts strongly in the pocket of those who like the refreshing drink.

It is therefore imperative to enforce what has been ordered; to follow that skein that seeks to suffocate the normal course of the country’s economic and commercial processes and, let us reiterate, the pockets of the people.

It is clear that under no circumstances will the steep rise in prices be allowed; neither of the beers, nor of any other product necessary for everyone. It must not be done by the state or private sector. That is also a way of thinking as a country, thinking like Cuba.