Brazilian Women Say “NO” to Harassment

‘No means no’: Women say enough to sexual harassment at Brazil’s Carnival 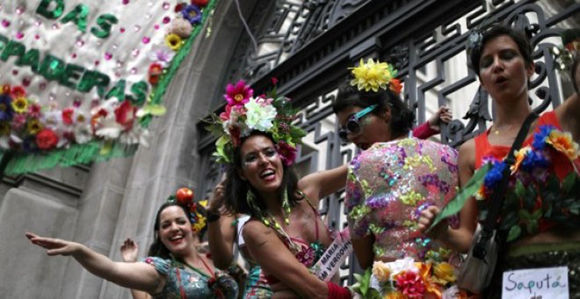 Women having fun at Carnival in Rio. Photo: Reuters.

Not to be kissed by force, not to be cuddled up to from behind and not to be grabbed around the waist without prior consent: Brazilian women have mobilized more than ever this year around the “No means no” movement to put an end to the frequent instances of sexual harassment inflicted on them during Carnival.

The situation is repeated countless times per day in many of the dance troupes that fill the streets in Brazilian cities and towns: A man begins to make advances to a woman, the woman tells him to stop, that she’s not interested, but the man keeps insisting.

In just three hours, a woman can be accosted up to five times, according to what some of them have said.

But something is changing in Brazil, although for the past two years, the number of sexual harassment complaints during Carnival has been growing in a country where 52 percent of women who have experienced such behavior from men have decided to keep silent, according to a survey by the Brazilian Public Safety Forum.

In 2018, stickers and tattoos have begun being seen calling for respect for women’s bodies and an end to macho behavior that is still seen as natural among a large portion of the public.

“When we say ‘no means no,’ we’re speaking up so that women can empower their bodies, we’re saying they aren’t obligated to endure that and that they have a support network,” Julia Parucker told EFE.

Even the police seem to pay the issue little heed. At one Carnival celebration in the state of Pernambuco, one girl said that when she went to the police to complain about a sexual attack the officer said: “Girl, this is Carnival. What do you want me to do…?”

Given that situation, Parucker and a group of female friends have launched an initiative –with donations from the public– to print 25,000 stickers for women to stick on their skin saying “Nao e Nao” (no means no).

“Our bodies are going to be our battleground, where we cry that there’s no reason for it to be like this,” she said.

The initial target was to collect 7,500 reais (about $2,330) but the campaign resonated so strongly among women that they received 20,457 reais ($6,365), which has allowed them to get their message out in the cities of Rio de Janeiro, Sao Paulo, Salvador, Belo Horizonte, Recife, Olinda and Brasilia.

Even if this is a “daily battle”, Parucker believes, it is important to step up the struggle against harassment whenever “it is necessary, like during the carnival”.

Eloisa Honorato, 31, a member of a dance troupe called “Maravillosas Cuerpo de Baile” (Wonderful Corps of Dancers), enjoys the atmosphere of the popular Sao Paulo-based parade Pilantragi together with more than twenty of her colleagues.

Most of them are carry a female symbol on their head and a top with a patterned music player showing a comb shaped like a Fallopian tube. Eloisa, however, displays a full-body painting, her breasts covered with two red hearts surrounded by a golden bra-like drawing.

“We’re here to fight against patriarchy and against an oppressive society that believes itself to be the owner of our bodies”, Eloisa complains. “We’re all fed up, we can’t take it anymore, and when we all get together we feel stronger and protected by the energy we create”, she adds.

Near them is Luiza Gonçalves, 21, who says “as women we are now more empowered and aware” that we don’t have to put up with “any intolerable situation”.

At least 42 percent of Brazilian women say they have suffered sexual harassment, according to a survey conducted by Datafolha and released last December. A third of them admitted to being sexually accosted as they were walking down the street.

To Parucker, Carnival is particularly delicate because men take advantage of the fact that everybody is happy and joking to “poke around”, to put it mildly, convinced that they can get away with it and nothing will happen.

In her opinion, there’s still a long way to go before society and authorities stop downplaying the cases of harassment “so typical” during Carnival.

The tattoos, stickers and other signs saying “No means no” are the start of a situation in Brazil where women who suffer sexual harassment can “have the courage to complain” because “when we say no means no it’s not a yes or a perhaps. No means no and (men) have to respect that,” said Parucker.