Home Ballot Boxes in a Minefield

Ballot Boxes in a Minefield

Ballot Boxes in a Minefield

The punitive measures that continue to be implemented in a hurry by Jeanine Áñez’s illegitimate executive, sow doubts about the path towards the announced elections in Bolivia 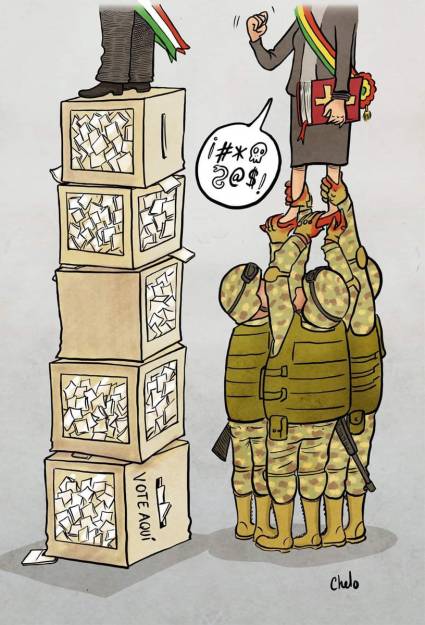 Each day that passes sows more scepticism about the cleanliness of the elections announced by Jeanine Áñez. She is the head -only the visible head, of course- of the executive under which a blow is masked that continues, while the breakup of Evo Morales’ refoundational work does not cease. And this includes society as a whole… and individuals.

The harassment of the masses in the streets – which characterized the first days after the military’s “commotion” of the reelected President to leave – has been followed by selective repression that in various ways, as is the practice in the unconventional wars in now in vogue. These include imprisons, segregation, demonizing and persecuting while trampling and destroying everything that the Movement Toward Socialism (MAS) had built. The actions of the usurpers are by presidential decree, as they should be.

The signs are seen, precisely, in this devastating effort, undertaken with speed and urgency as if it were a matter of leaving no trace of the society that was built during the most recent 14 years. It’s as if it were necessary for Bolivia to enter “aseptically” in the period that will open when Áñez – as “God commands” – will hand over the position she illegally holds, since, moreover, she is supposed to be heading a transitional government.

It is only because of this desire to exterminate that we could talk about “cleaning up” in Bolivia today.

Some headlines are enough to show what is happening and to confirm, in passing, the transcendent role that “the media” continues to play in the Bolivian panorama, first bombarded, as has been denounced, by sophisticated work on social networks that includes the tens of thousands of fale Twitter accounts opened to support the coup.

Added to this are these media that, just yesterday, were spreading the work of the MAS and in 24 hours took on the lying discourse of the coup leaders. In this way, they were also showing the brutal way in which the official communication channels have been taken over and are used to manipulate.

With bayonets, and without them
There is a lot of crudeness, however, in the projection of these media, so that someone moderately aware of the truth does not read between the lines. This is how one can infer the interested sponsorship of the so-called “civil resistance” groups, a term coined in Bolivia during the uprising to attribute the positions of the coup leaders to those from below. They were pretending that they had support in the people, and which is now used to disguise the identity of paramilitary groups – that’s how Evo has called them – that replace the military and police forces in the persecution of the Morales government leaders.

In this way, one of these groups surrounded the home of the former government minister, Carlos Romero, “to avoid a possible escape,” said ABI, until the saving declaration arrived from the now appointed head of that ministry, Arturo Murillo – a man who seems to give more orders than Áñez herself – saying that Romero “has no formal accusation and absolutely nothing yet (…); then, he can circulate on the streets normally.

But not everyone has had the same “luck” as the former Romero. A woman identified only as an “employee” of former presidential minister Juan Ramon Quintana – a wanted man who has been given protection by the Mexican Embassy, which is still guarded and surrounded – was arrested on Thursday at an airport, accused of attempting the “irregular” transfer to Argentina of an unusually large sum of money.

In this way, the most atrocious persecution is orchestrated, which does not even use false charges and makes one think, at times, of the possibility of a lynching.

On the other hand, the hunt advances by means of the false criminal proceedings that once again remind us of how politics is judged in Latin America.

No less than 592! people will be investigated by the Attorney General’s office just for being in “the top” of MAS, for having occupied some “position of authority” during their terms, or even for being a relative of one of them.

The announcement was made by Alvaro Coimbra, who has been given the Justice portfolio. He said that among those being investigated are all those who have held state functions between 2006, the date of Morales’ arrival to the presidency, and last November.

It is alleged that the aim is to identify and judge those who have committed “corrupt acts  of corruption”. The suspected investigation will work on a list that includes senior politicians, government officials, judicial officers, military personnel, senior executives of state-owned companies and important political party officials, according to the alternative web publication Tercera Información.

“The de facto justice minister is violating the CPE by presuming the guilt of 592 former MAS officials and their families. He puts himself above the judges by passing sentence, without a prior trial. The regime of Áñez, Mesa and Camacho is violent, a sower of false evidence and a slanderer”, Evo denounced in his Twitter account.

But there is a growing threat to him. In addition to the charges of “terrorism” and “sedition” that are falsely attributed to him, the coup leaders have now “requested” that Interpol activate an international arrest warrant for him.

Dubious environment
In such a scenario of persecution, with hundreds of MAS leaders and social activists imprisoned or threatened by corrupt judicial processes, it has been announced by the current Supreme Electoral Tribunal – renewed by the coup d’état, with a hand-picked membership and departments where it was not possible to propose candidates – that the elections will take place on May 3.

With these elections, the coup regime hopes to pass the baton and give itself a facelift. The MAS, in a daring decision, is going to the electoral tournament to recover the space that has been stolen from it, in an artful way, in Bolivian institutions.

Although the registration period for candidates closes on February 3, there are already candidates linked to the usurpation who have confirmed their candidacy, such as Carlos Mesa, Evo’s main rival and loser in the unknown elections of October. It was Mesa who set in motion the strategy of the alleged fraud since before those elections. Then there is the Santa Cruz coup-plotter and civic leader Fernando Camacho, who is already campaigning in Cochabamba, the bastion of Evo and the MAS, and the Korean-born Bolivian Chi Hyung Chu, who, like Mesa, is running again after the October elections.

The MAS has yet to reveal its candidates, which it has announced it will do in the coming days. But they are using names like former Foreign Minister David Choquehuanca, the also former head of the Economy Department Luis Arce, or the young coca growers’ leader Andrónico Rodríguez, who has just denounced the existence of “a systematic operation to behead and destroy the leadership of the Movement Toward Socialism,” and the attempt by the de facto executive to disqualify him, presenting him to the population “as the radical, as the one who seeks death and violence, and that is totally false,” he said.

Not only does the massive participation of its followers in the expanded meeting that took place in December in Cochabamba show the roots of the MAS.

An early poll released in recent days, and when the identity of the MAS candidates has not yet been revealed, gave whoever represented it the highest percentage of voting intentions (20.7 percent), above the usurper Áñez (15 percent, although she says she will not run), and Carlos Mesa (13.8 percent), among other hypothetical contenders.

However, it is doubtful that the coup d’état would allow clean and transparent elections like those he said he would demand in October: it was they who burned amphorae, committed violence, and dirtied the game to reinforce the false accusation of fraud that “justified” Evo’s deposition.

Another element, external, not only shows where the umbilical cord of that Bolivian coup is tied, but also allows one to guess what purposes that cord feeds.

Donald Trump has just announced the resumption of the so-called aid for the anti-drug struggle that Morales resigned due to the lying and interfering nature of that combat from the United States, and from its representative, the DEA.

The most eloquent thing is not that the mendacious Republican President returns to the usurpers the money that the Bolivian refoundation resigned, but the reason why he is giving it now.

According to Trump, Bolivia “is vital” to his country. And he has just discovered this after the coup leaders called for elections. It is not difficult to see what the aid is really for, and what he is looking for.