Argentine solidarity in defense of Cuba 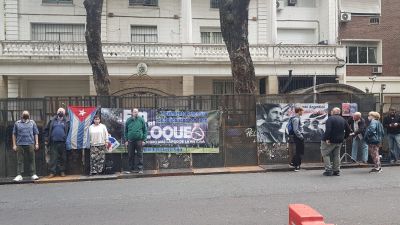 Last Monday, October 11, from the most recalcitrant of the Argentine right wing and the small group of Cubans residing in the country who adhere to the so-called Patria y Vida (Homeland and Life), an attempt at an attempted attack was organized against the Cuban diplomatic delegation in Buenos Aires.

In the face of the attempt by a gusano-Cuban group financed by CADAL, Center for the Opening and Development of Latin America, an Argentine anti-communist NGO linked to the US State Department, the CIA and USAID, the MAS Cuba, Argentine Movement of Solidarity with Cuba, immediately mobilized and occupied the front of the Embassy, preventing the action, which included throwing eggs against the front of the building.

The tiny anti-revolutionary group had the support of the right-wing faction of the Libertarian Party, which openly adheres to the policies of Bolsonaro in Brazil and VOX in Spain, and tries, with violent actions and speeches, to capture the most dissatisfied sector of society, reproducing those policies in our country, which only benefit Washington’s recolonizing project.

#CubaNoEstaSola, those in solidarity with the Cuban Revolution, with their quick call, did not allow an attack on the diplomatic representation of Cuba in Argentina.

In video, solidarity prevents attack on Cuban Embassy in Argentina: