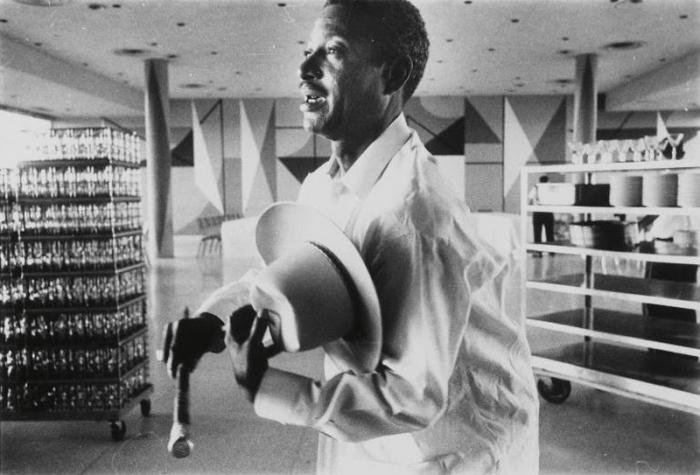 Agnes Varda arrived in Havana in the last weeks of 1962. She did not shrink from the recent events that had kept the world on edge, with the Island at the center of one of the most critical episodes of the Cold War, the missile crisis and the danger of nuclear war.

Shortly before, she married Jacques Demy, in his second marriage. He was two years away from becoming a famous filmmaker with the musical The Umbrellas of Cherbourg. She, of Belgian origin but French by adoption, had debuted on the big screen with the film La Pointe Courte in 1954, which dealt with the relationships of a couple in a fishing village from which she took the name of the work, and appeared as one of the most disturbing personalities of the so-called nouvelle vague (new wave) since the 1961 release of Cleo de 5 a 7, a sensitive reflection on the boundaries between life and death.

Since she traveled without a film crew, Varda chose to record reality with a small Leica camera and ordinary black-and-white film. She wanted to know what was happening in the streets of the city, among people she loved, laughed, danced, and did not stop to philosophize amid challenges and tensions arising from a revolution threatened by a powerful neighbor.

She was not an improvised photographer. In the early 1950s, after studying Art History, she worked as such for none other than the National Popular Theatre of Paris, directed by Jean Vilar.

But the idea of portraying Cubans did not mean for her to return to the field of photography, but to use the images in a film. In February 1963, she revealed her purpose in an interview published in La Gaceta de la Unión de Escritores y Artistas de Cuba: “I’ve been struck by how much people move and how they move, and I want to give you an idea about that. But I am going to express it with an opposite procedure: by means of fixed photos, which I will then animate based on the intermediate movements. Thus was born Saludos, cubanos (Salut les Cubains), which premiered in 1964.

In the winter of 2015, the Centre Georges Pompidou in Paris asked the mythical filmmaker – at that time she was revered for La felicidad (1965), Daguerrotipos (1975), Sin techo ni ley (1985, winner of the Golden Lion at the Venice Film Festival) and Jacquot de Nantes (1991) and had just become the first woman to be awarded the Palme d’Honneur in Cannes – to collect the Havana photos for the first time.

She thought that the curatorship would opt for other images, for example, according to her words “a portrait of Salvador Dalí, another of Eugene Ionesco or things from the Europe of the 50s and 60s, considering that Cuban photographs were never conceived to be exhibited”.

Varda/Cuba was a rediscovery. There were Fidel Castro, smiling despite the fact that when the photographer found him she asked him not to smile; those who had learned to read from the 1961 national literacy campaign who later decided to train as teachers, cane cutter volunteers, teenage loves, and children’s games.

That’s where the great Benny Moré appeared, with his unbeatable singer’s stamp even when he knew he had been wounded to death, and a very young Sara Gómez, dancing a cha cha chá dressed as a militia member for the days when she dreamed of being the first Cuban filmmaker.

From Saturday, April 29 to June 10, Cubans can see a hundred of Varda’s images. The National Museum of Fine Arts will display them in an exhibition that accompanies the 20th French Film Festival in Cuba.

Some will succumb to nostalgia. Others will not, because they will see in that graphic testimony, more than an unrepeatable moment, the trace of what was carved in time, of a resistant spirit.

“The grandmother of French New Wave cinema” talks with LA Review of Books producer Michael Kurcfeld about her 1962 photograph series and film on Cuba, along with her views on filmmaking and the recent terrorist attacks in Paris. Shot at her home/studio in Paris in Nov 2015.