The biggest dilemma in these elections revolves around the figure of Benjamin Netanyahu, Israel’s first acting head of government on trial for corruption 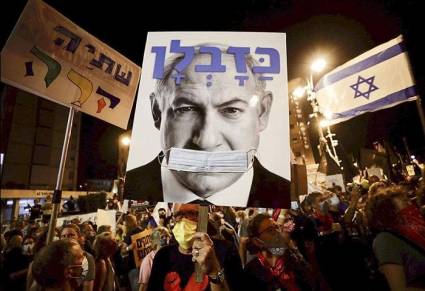 A dozen parties barely differentiated by shades of right or extreme right, Jewish religious orthodoxy or personal leadership are competing this Wednesday for the 120 seats in the Israeli parliament.

These political groupings have been battling for two years to reach a majority of at least 61 deputies, which would allow them to form a government.

So far, none of the formations managed to reach the necessary quota with their own voters, so everything depends on the strength or fragility of coalitions of convenience, pending the distribution of power quotas and leadership ambitions.

The biggest dilemma in these elections revolves around the figure of Benjamin Netanyahu, Israel’s first acting head of government to be tried for corruption.

Despite his controversial situation, the leader of the right-wing Likud Party is seeking his fifth term in office with the apparent intention of gathering the necessary support to shield himself with an immunity law that suspends the trial and frees him from jail.

The Israeli president has been facing three separate cases since 2020 for bribery, breach of trust and fraud, in a trial that resumed in February of this year.

At least 20,000 Israelis rallied last Saturday in a wide avenue in front of Netanyahu’s residence in Jerusalem to demand the end to his government.

It was the largest act of repudiation of the president of those carried out week after week during the last nine months, in which they criticized his mishandling of the COVID-19 pandemic and the economic crisis.

However, the experienced right-wing politician, son of one of the founders of Zionism and one-time dauphin of the leader of the Jewish terrorist group Irgun and former premier Menachem Begin, fostered his popularity on his friendship with former U.S. President Donald Trump and Israeli expansionism in the occupied Arab territories.

In reality, it is the record of the bloody expulsion of the Palestinian people from their lands and homes since the proclamation of the state of Israel in 1948 and the participation in the subsequent wars of dispossession that enrich the record of Israeli politicians in this contest.

Most of the leaders contesting this Wednesday’s parliamentary elections exhibit high military ranks in the wars of aggression against Arabs and Palestinians, or successful performance as heads of intelligence and repressive bodies in Gaza and the West Bank.

Another layer that disputes the leadership of the Zionist state emerged in the last 40 years in the expropriation campaigns in the West Bank, the promotion of illegal Jewish settlements and the installation of more than 600,000 settlers.

While Netanyahu has been Israel’s prime minister for the past 12 years, his victory in the upcoming parliamentary elections is not assured.

The most recent election polls predict a tight race in which Likud and its nationalist allies will face a fierce battle of opponents, including former allies, eager to push him aside and take over the reins of business themselves.

Israel enjoys generous non-reimbursable aid from the United States of more than $3 billion, in addition to the transfer of weapons and technologies needed to guarantee military supremacy in its neighborhood.

In the opinion of analysts in Israel, Netanyahu counts in his favor the successful vaccination campaign against Covid-19, which he achieved by hoarding the doses, with the consent of Washington and European allies.

Israel boasts of being the place in the world where more doses have been administered per 100 inhabitants, including 75 percent of adults, in only three months.

In that eagerness, it disregarded its obligation as an occupying military power in the West Bank and Gaza to leave the millions of Palestinians living in both territories without vaccines, another confirmation of the practice of its apartheid policy, which also does not enter into the electoral debate.

However, analysts themselves say that not even the rapid advance of the vaccination of his co-religionists could be enough to save Netanyahu’s political skin.

The latest election polls allowed by Israeli law, published last Friday, give the pro-Netanyahu bloc of parties 51 seats and the anti-Netanyahu bloc 56 seats.

Even if the undecided right-wing Yamina party – with 9 seats – joins the pro-Netanyahu bloc and the Ra’am – 4 seats – the anti-Netanyahu bloc, it would result in a 60-60 tie.

That balance would leave the two with no chance of forming a majority coalition government.

And then, for the first time in the history of the Jewish State, there will be a fifth call for elections.