Home Anne Frank on stage at the Ludi Theater

Anne Frank on stage at the Ludi Theater

Anne Frank on stage at the Ludi Theater

With the season on stage of The Diary of Anne Frank, apnea del tiempo, a play by Agniezka Hernández, the collective directed by Miguel Abreu celebrated in style its eight years of existence. 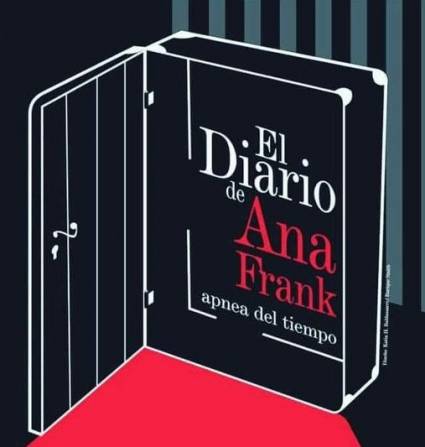 A recontextualization, markedly intimate and shocking; a sincere experience as moving as questioning in its relevance and sharpness of discourse is the play The Diary of Anne Frank, apnea of time; a proposal masterfully defended by Ludi Teatro, under the direction of Miguel Abreu.

With the end of that season, the group located on I, between 11 and 9, in the capital’s Vedado neighborhood, celebrated in style on June 12 its eight-year trajectory, marked by an intense and excellent work, which shows the maturity achieved in its stage performance.

The play was written by Agniezka Hernández (Harry Potter: The Magic Is Over, El gran disparo del arte, Los Pájaros Negros de 2020), one of the most accurate and remarkable voices in Cuban playwriting today. It was conceived from the theatrical adaptation by Americans Frances Goodrich and Albert Hackett, premiered in 1955 and based on the book of the same name by the Jewish teenager.

The production was a new success in Miguel Abreu’s work as director and another success in his group’s repertoire, which includes titles such as Ubú sin cuernos, Incendios and El vacío en las palabras. The harmony between music (original by Llilena Barrientos) and dramaturgy, the acting performance of the cast (Arianna Delgado’s deep and passionate work as Mrs. Frank), as well as the excellent costume design (Celia Ledón), all of which served to ratify Ludi Teatro’s line of offering the spectator an impressive experience from a complete show, full in its staging and quality of the aesthetic and sensorial composition.

In several media, Agniezka Hernández stated that the play was born during the times of confinement due to the Covid-19 pandemic. In an interview granted to journalist Mery Delgado and published in the Cubaescena portal, the playwright and director of La franja teatral explained: “On the shoulders of the historical revision of the Holocaust is a pandemic in which I asked myself too many questions. I saw myself with my 13-year-old daughter locked in a house, locking up and saving her beauty for later, and for the first time I understood what it must have meant for Anne Frank to be hidden in “the Secret Annex”. For the first time, I understood the war and saw Anne’s mother, Mrs. Frank, as her daughter put off education, happiness, the desire for outside or beauty (…). There was no story to weave because it had been lived from our windows. The dilation of adolescence was under my roof”.

And with that weight, with those doubts, worries, fears, combined words… With that return to the past to reconfigure the present or rethink the present; with that parallelism between the adolescent Ana and her own daughter, is that a vibrant text was born and also painful in its very personal essence: “The day Anne was born, I put away my mountain climbing boots, I sold the bike, I said goodbye to all my lovers one by one, I told them, the fun is over. With Ana in my arms I learned to say I can’t, that’s dangerous, maybe another day, look, that’s a tremendous risk”. And with each message of the piece, the spectator was also able to immerse himself in the mysteries and anger of his own confinement.

For his part, the experienced Miguel Abreu, in a text written by journalist Wendy Zuferri and published in Cartelera magazine, commented on the play: “What is narrated is really centered on the coexistence of these families in the house in the back, which has been turned into a shelter. We try to create plays that are not local but universal and that address issues such as family, emigration, inheritance or historical memory. Our goal is for these stories to move us to a positivist and humanist reflection of society”.

The piece has a markedly intimate nature.

The theater is always a risk, a collective experience that requires bravery, courage and sincerity. The diary of Anne Frank, apnea of time is proof of this because at every moment it invited us to bare our souls, to expose ourselves.

“Dear diary, I feel we are losing ground,” Anne is heard saying in one of the parliaments of the piece. Perhaps she is right. Although the season of the play has already ended, it leaves us the opportunity to go to a necessary encounter with our being and what surrounds us. Ludi Teatro has marked the way, because there will always be time to talk about Anne Frank.

With this play Ludi Teatro, a collective that celebrated eight years of existence on the 12th of this month, adds another success to its repertoire.